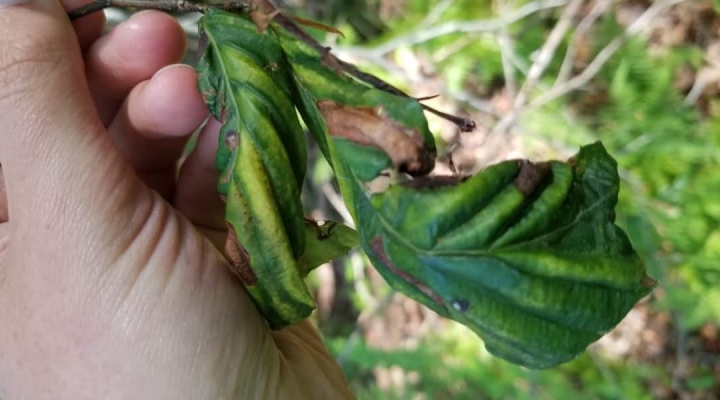 Much is still unknown about BLD, including how it spreads, but it can kill mature beech trees in six to 10 years and saplings in as little as two years. There is no known treatment for infected trees. Above: Advanced symptoms of BLD. (Photo courtesy of DEC)

ALBANY — The New York State Department of Environmental Conservation (DEC) has announced that Beech Leaf Disease (BLD), which affects all species of beech trees, was identified in 35 counties in New York State to date. DEC began tracking BLD in 2018 after it was confirmed in Chautauqua County. Fourteen of the counties with BLD were confirmed in 2022, and more are likely to be identified.

“Many American beech trees are already heavily impacted by beech bark disease, but Beech Leaf Disease appears to be an even bigger threat,” said DEC Commissioner Basil Seggos. “The decline of beech in New York could have far-reaching consequences, including significant changes to the composition of our northern hardwood forests and the loss of a valuable food source for wildlife. Beech Leaf Disease affects all beech, so the impacts would also be felt in our urban forests where ornamental beech trees, including the popular copper beech cultivar, are widely used for landscaping and street trees.”

Much is still unknown about BLD, including how it spreads, but it can kill mature beech trees in six to 10 years and saplings in as little as two years. There is no known treatment for infected trees. BLD symptoms are associated with the nematode Litylenchus crenatae mccannii. It is unknown whether the nematode causes all of the damage, or if it is in association with another pathogen such as a virus, bacteria, or fungus.

DEC’s Forest Health Diagnostic Lab is experiencing a recent surge in requests for BLD diagnosis and treatment options as landowners begin to notice a rapid decline in the health of their beech trees. Most of the reports are from Suffolk and Westchester counties where BLD is widespread. DEC is asking the public to submit reports through NYimapInvasives if they encounter a beech tree showing signs of BLD, especially for counties where BLD has not yet been confirmed.

The main symptom to look for on beech foliage is darkened striping between the veins, which is best seen when looking up through the canopy. Leaves with severe symptoms can be heavily banded and crinkled, with a thickened leathery texture.

At this time there are no specific recommendations for managing trees that are infected with BLD, however, DEC encourages the public to report potential BLD infections using iMapInvasives to help track the disease while research is ongoing. 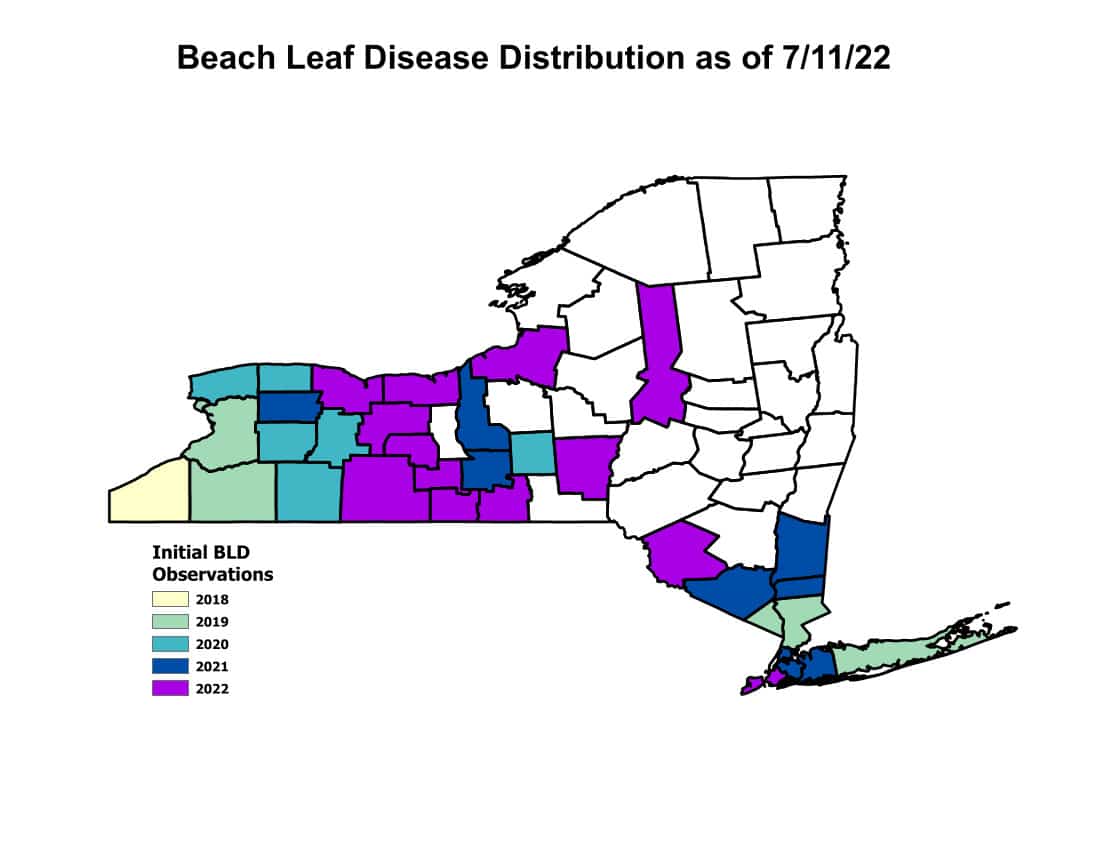