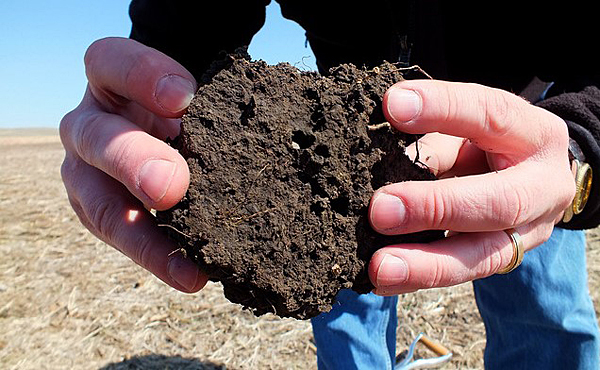 CASTLE ROCK, Colo. — As we get the outdoor itch from being cooped up all winter as a result of from the pandemic and cold weather, some of us think about going to the local nursery to purchase compost, peat moss, manure, and other soil amendments to get ready for gardening. These are all important elements of gardening but amending the soil has so many misconceptions I thought I would address a few. First, let’s look at the science.

The ideal soil consists of about 25 percent air, 25 percent water, about 45 to 47 percent mineral matter, and about 3 to 5 percent organic matter. Soil texture and soil structure are also important elements. Soil texture refers to the size of particles that make up the soil, including large particles of coarse sand, medium particles of silt, and small particles of fine clay. The larger the particle, the more space for air, but too many large particles allow water to drain away. Thus, coarse sand by itself is not a good growing medium for roots. Scientists refer to the ability of roots to grow in soil as soil tilth. Soil structure refers to how the various particles of sand, silt, and clay fit together. A good soil has a mixture of various sized particles with various chemical and biological components that bind the particles into aggregates. An ideal soil allows air for microbial activity and root growth and retains water. Organic matter in the soil does increase water-holding capacity in the soil.

Myth #2: Adding lots of compost during planting promotes root growth and plant health. Adding organic matter when planting does indeed promote root growth, but it may not result in a healthier plant. The ideal soil only contains 3 to 5 percent organic matter and filling a hole with 25 percent organic matter (or more) when planting is not ideal. Under good watering and sunlight conditions, the initial results of all that compost appear good. That is, roots show vigorous growth and the canopy of the plant responds accordingly. Then the roots hit the edge of the hole and encounter natural soil with less compost in it. Preferring the compost to the natural soil, the roots circle back into the compost, resulting in a condition called “girdling” roots. The result is an unhealthy lack of spread of the roots into the natural soil. When the compost you initially placed in the hole decomposes, the roots will actually have less access to nutrients because they have not extended their reach beyond the now decomposed compost to absorb more nutrients. In addition, the different soil textures inhibit the natural flow of water, so water falling on one soil texture may not flow into soil with a different texture, leaving some soil dry. Specifically, water cohesion allows water to coat soil and mineral particles, which is one reason organic matter retains water so well. Water moves through fine clay soil through capillary action. Thus, water does not readily move from organic material to clay or from clay to organic material because of the different processes facilitating water movement. Different soil textures do not promote root growth.

Myth #3: Enough application of compost will solve most soil problems. If a planted plant dies, an incorrect assumption is that it did not have enough organic matter. Organic matter is a necessary element for root development and plant health, but it cannot solve all soil problems. Drainage, compaction, sunlight, microclimates, and salt buildup are all problems with soils that organic matter might not necessarily help your plant overcome. In fact, adding too much organic matter, particularly manures, could increase salt buildup in the soil. Soil amendments can be deceptive because in the short term, the added benefits can be seen in the growth of the above-ground portion and overall apparent vigor of the plant, but over the long term, the detriments could outweigh the benefits. Applying organic matter is one aspect of gardening. However, managing other cultural practices, such as planting the right plant in the right place for the drainage, soil conditions, and sunlight, is no less important.

The takeaway from all this is to understand the holistic needs of plants in your garden. Amending the soil is one important part of the holistic view but understanding what it does and does not do can help you attend to your plants much better. For more information on soil amendments, see https://cmg.extension.colostate.edu/Gardennotes/210.pdf.