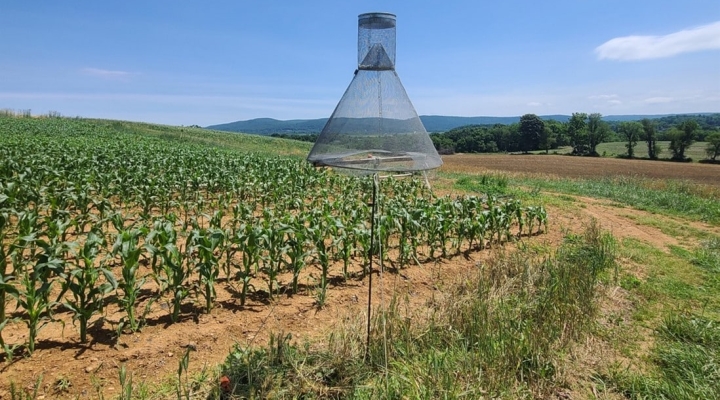 Many of us look forward to fresh sweet corn in the summertime. However, that enthusiasm quickly disappears if we discover a worm in our corn. The most common culprit these days is a caterpillar known as corn earworm. (photos by Penn State Extension)

CHAMBERSBURG, Pa. — Many of us look forward to fresh sweet corn in the summertime. However, that enthusiasm quickly disappears if we discover a worm in our corn. The most common culprit these days is a caterpillar known as corn earworm. These can become quite large in their later development stages and typically feed right near the ear tip, damaging kernels and leaving behind frass that can host mold growth. These caterpillars can range in color from pink to yellow to green and are covered in spines. The head capsules will be an orange-ish brown and appear to have a lighter honeycombed pattern across them. They can be cannibalistic, so you will rarely find more than one per ear but one is plenty to render that ear unmarketable. 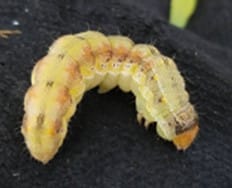 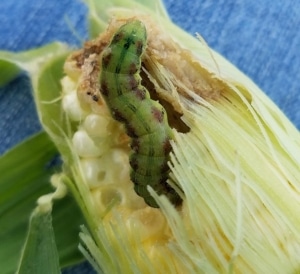 Adult corn earworm females will lay eggs on corn silks, so corn that is silking or tasseling is what is most at risk from damage. Once eggs hatch, the tiny larvae will feed on the silks as they make their way into the ear where they feed on kernels and grow until dropping out to the soil to pupate and emerge as moths again. There can be numerous generations per summer, starting in our area around May or June and sticking around until September when the corn season concludes.

Historically, pupae have not survived Pennsylvania winters and moths would arrive later in the summer after flying up from southern regions. However, we are seeing their arrival in corn earlier in the summer these days and now have a longer period of time to worry about managing them. They have been feeding in sweet corn in our region since early June this year and numbers of moths have been increasing throughout the state in the past couple weeks, so they are likely a concern for many of you that are growing sweet corn right now.

Management of corn earworm focuses on the caterpillars that feed on corn, rather than on the egg, pupal, or adult stages. Cultural practices that can aid in management include choosing varieties that either have tight, long husks to inhibit the movement of caterpillars into the ear or by choosing varieties that express Bt toxins that are affective against corn earworm. Additionally, planting date can influence the susceptibility of sweet corn to damage. There are typically more moths earlier in the season than later, so later plantings are most at risk. Additionally, there is more limited host plants available for moths to choose from once field corn has finished silking and sweet corn is the only silk source remaining for the season. 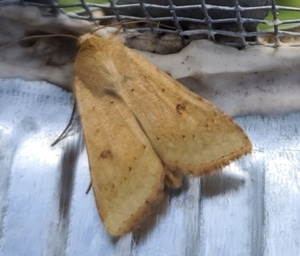 We monitor their populations by trapping adult moths adjacent to corn fields and using those numbers to estimate their movement into fields. Male moths caught in traps will be a light tan in color with a small line of black spots along the edge of the forewing and slender brown antennae. Penn State Extension monitors traps throughout the state of Pennsylvania, including two trap sites in Franklin County, and posts weekly counts on the Penn State Extension website and at information kiosks at most produce auctions. They are also available in a recorded voice message by calling the Pennsylvania IPM hotline at 1-800-PENN-IPM (1-800-736-6476), selecting 1 for Vegetable Info, and then selecting 4 for Sweet Corn. These counts can be used to inform chemical management decisions, by helping determine how often corn must be sprayed to prevent infestation. The below chart offers recommended spray intervals based on trap counts. Chemical management should be directed towards good contact with corn silks, using drop nozzles and at least 30-40 psi. If managing a smaller planting and using a small backpack sprayer, aim spray directly toward corn silks to ensure good coverage is achieved. Diamides and spinosyns/spinosads typically provide the best efficacy but many growers also use pyrethroids to manage corn earworm, particularly if they have trouble with other pests such as sap beetles or stink bugs simultaneously with caterpillars.

Land-use webinar to focus on dealing with difficult issues