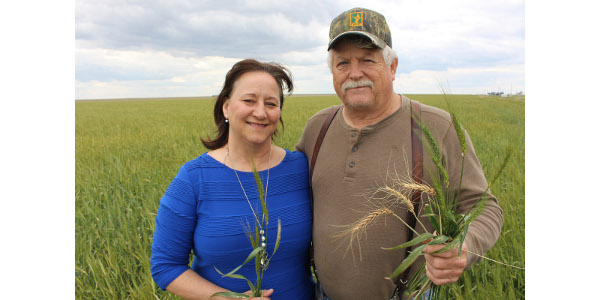 Tom and Marieta Hauser's story is the first in KFB's "Dealing with Disaster" series created by veteran farm journalist John Schlageck.The series features Kansas farmers and ranchers and their ability to rise above devastating disasters including the state's largest wildfire, an April blizzard and its impact on this year's wheat crop. (Courtesy of Kansas Farm Bureau)

MANHATTAN, Kan. — Too much moisture on a wheat farm in southwestern Kansas in late April?

That never happens. Out here conditions are usually bone dry. When farmers don’t harvest a wheat crop it’s often because of too little moisture.

Tom and Marieta Hauser farm a couple miles from Big Bow between Ulysses and Johnson. The blizzard that blasted this region of Kansas in late spring delivered another blow to their fragile existence on the great High Plains.

On the early afternoon of April 29, the storm blew in with a vengeance and blanketed some of Grant County with as much as 20 inches of heavy, wet snow. A blizzard of this magnitude seems to hit western Kansas just about every 30 years. The last one occurred in 1987 and the one before that swept in during the tail end of winter in 1957.

Marieta recalls what happened this year. Before the snow ever started that afternoon, more than two inches of rain fell.

“Out here you have to prime the pump, before moisture really starts coming,” she says. “It snowed and the wind howled for nearly two days. In the middle of the night the electricity went out.”

When the snow stopped late Sunday afternoon, the sun came out and the sky turned a deep blue. On the ground, nothing but beautiful white snow. Underneath the snow, that was a different story.

“The first day after the blizzard, you couldn’t see the wheat,” Tom recalls. “The crop was buried under the snow. When I saw that I didn’t hold much hope for a crop.”

Day by day as the snow melted, the wheat picked itself up from the ground as if to say, “I still have some life left.”

Still, the 2017 wheat crop didn’t look as bountiful as before. As Tom continued to visit the fields and check on the status of the crop, he found a bit of frost damage with crocked heads containing white beards.

The Grant County farmer also found some hail damage and the weight of the snow broke some of the wheat stems about six to 12 inches from the ground. Not all the wheat laid over by the snow stood back up. Touches of yellow in the crop indicated mosaic wheat virus.

As May moved into June, the wheat continued to head out and fill. Weak spots in some of the stocks broke off and fell to the ground.

What happens to this year’s wheat crop will be determined by the weather. If it remains dry, farmers may be able to harvest downed wheat with a pick-up header.

What will the Hauser wheat crop make this year?

If it stays standing, Tom believes he could harvest 25-bushel wheat. Before the blizzard he hoped to harvest a 40-bushel crop, maybe even some 50-bushel wheat.

Last year Tom harvested the best crop since he started farming back in 1975. This bumper crop averaged better than 50-bushels-per acre.

“We broke even after raising the best crop in more than 40 years farming,” he says. “The price of wheat continued to decline.”

This year he faces the same depressed commodity prices coupled with escalating debt.

“I love farming,” Tom says. “It’s the best life I can imagine – raising food for people. Despite this rough period, I’m in it for the long run.”

An ace-in-the-hole that helps the Hausers keep farming remains Marieta’s off-farm employment. She’s worked since they were married except when their children were small.

She currently serves as the Ulysses chamber director. The down-turn impacts Mainstreet as well as farmers and ranchers in this region of the state.

Before last year’s bumper crop, the Hausers experienced approximately five years of drought. While they insure their crops, each year costs more and yield averages continue to decrease.

The Grant County couple has discussed on more than one occasion how far in the hole they want to go before they pack their bags and leave farming.

“How many disasters beyond our control can we handle and still continue?” Marieta asks. “I know one thing for certain, without our off-farm income the Hausers probably wouldn’t be farming today.”

The farm couple hasn’t hit that point yet. They understand that agriculture remains a difficult vocation. Commodity prices go up and down. International trade can be a fickle friend.

Still the tradition of western Kansas farmers and ranchers is steeped in the traditions of adversity. The dust bowl years of the Dirty ‘30s. Drought. Too much rain. The white combine (hail). Wind and tornadoes. Tumbleweeds that take on cars and trucks and leave their mark.

“It’s either feast or famine out here,” Tom says. “Most of the time the famine outweighs and lasts longer than the feasts.”

Still, farm couples like the Hausers love the life they live.

“I guarantee you this,” Marieta says. “At night when I drive home and I see the sun setting and all the beautiful colors of orange, pink and purples and the wind has finally died down – oh my goodness – it’s like no other place on earth.”

And like the others who inhabit this isolated, rural land and communities, everyone pulls together. Neighbors help each other and understand out here, farming bonds people and community together.

Dry weather will return. But, such an event as the blizzard of 2017 will remain the center of conversation for quite some time.

Such talk reverberated inside the Wagon Wheel Café and Bakery located near a spot in the road known as Hickok just the other day.

“In the snow.” Ethel responded with a chuckle.

Fire up the grill