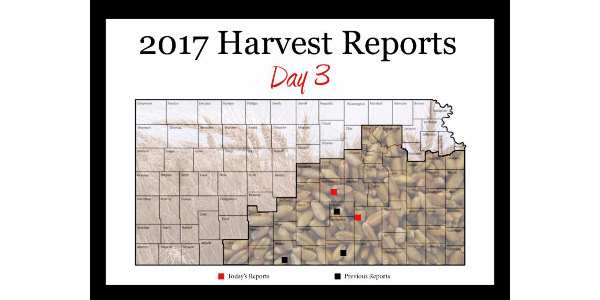 Variability is the name of the game throughout Kansas as harvest progresses through the state. Yields, test weights and kernel characteristics in south central and south eastern Kansas remain slightly above average, and reported proteins remain at similar levels to last year. However, answers for the western region of the state remain elusive.

“Estimation in western Kansas is pretty challenging, even this far in the season,” said Dr. Romulo Lollato, wheat and forage extension specialist for Kansas State University Research and Extension. “How things are going to turn out in the west is the biggest question of the year. We have great looking wheat in the region, but we have also had fields being abandoned due to Wheat Streak Mosaic Virus and snowfall.”

Dr. Lollato estimates that test weights in the western third of the state may be lower, but harvest in southwest Kansas may begin by this weekend, but west central and northwest Kansas may still be as far out as ten to fourteen days. Based on this year’s plot tours, Dr. Lollato reported some varieties that have held up well to disease pressure include LCS Chrome and SY Monument, as well as Kansas Wheat Alliance’s Zenda (a new variety that makes a good Everest replacement) and Joe (a newer hard white wheat variety.)

“There’s so much variability in yield and quality throughout the state,” said Dr. Lollato. “You have excellent fields standing right next to another that has been affected by snowfall or disease. It makes it incredibly difficult to predict.”

David Janzen, a farmer near Whitewater, reported that yields in his area have been ‘surprisingly good.’

“Everything has been pretty well above average for right now,” said Janzen. “We should be done by the end of the week with no rain and no breakdowns.”

Janzen said that test weights have held steady in the 60-61 pounds per bushel range. The Butler County area has seen problems with rust disease pressure and wet ground in the area.

Kim Baldwin, a farmer in McPherson County, said that her family’s harvest crew is gearing up for a long harvest.

Baldwin reported that some ground in the area is still not able to hold machinery due to the heavy rains in the region over the last few months. Many farmers are seeing drowned out spots due to the rain, while others in the central portion of McPherson County have also dealt with devastating hail. Leaf and stripe rust were prevalent throughout the county, but many farmers chose to apply fungicide via crop duster since the ground was too wet at the time to support a sprayer.

Yields and test weights for the Baldwin family have remained above average so far, and Kim hopes that trend will continue.