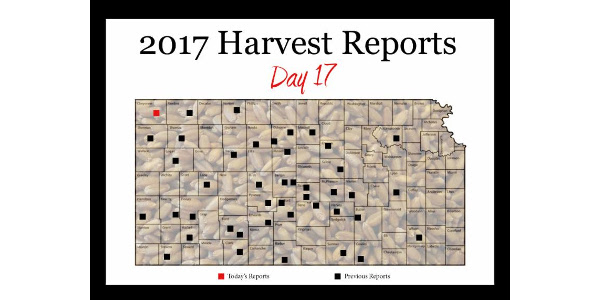 Wheat’s resiliency has been a common topic during this year’s Kansas Wheat Harvest Reports. From lack of moisture to a late season snowfall, wheat for many farmers has managed to cling on, produce bushels and show the value of modern wheat genetics. But, other wheat acres weren’t as lucky with circumstances like visits from hail, the “big white combine,” and widespread Wheat Streak Mosaic Virus.

According to USDA NASS, the Kansas wheat crop is 93 percent harvested, above both the five-year average and last year’s harvested report. Warm, dry weather across the state last week aided the progression of harvest, something that many wheat farmers in northwest Kansas were grateful for after weeks of showers, humidity and cooler temperatures.

Harvest around Bird City will be wrapped up by the weekend, according to Ray Magnani, manager of the Bird City branch of Frontier Ag, Inc. His location has taken in between 700 thousand and one million bushels. He reported that this is right below average, something that he attributes to lower acres planted, but good yields.

While the wheat acres in the area didn’t receive much hail in comparison to their southern neighbors, there was an influx of Wheat Streak Mosaic Virus in the county.

“There was more this year than I have ever seen before, and I’ve been doing this for 25 years now,” said Magnani.

“Protein is all over the place,” said Magnani. “We’ve seen some test at 15, but then we’ve seen some test way down into the 9’s. Those numbers depended mostly on variety selection and the fertilizer programs the farmers chose for their crops.

The Sunflower K-State Research and Extension District covers Cheyenne, Sherman and Wallace counties, and there’s a lot of variability in that large of an area.

“It’s been an interesting wheat harvest so far,” said Jeanne Falk Jones, Multi-County Agronomist for the Sunflower District. “I don’t remember a situation where we’ve had quite as much variability as we do this year.”

She reported that the area is looking at the last days of the 2017 wheat harvest, but sparse showers over the last few days have slowed some farmers down a bit. This year, yields and test weights have been a ‘mixed bag’ with everything from WSMV abandoned fields to yields upward of 80 bushels per acre. One of her farmers reported that showers had lowered test weights by up to 4 pounds, but the area ranges from the low 50s-62 pounds per bushel, with test weights increasing toward the north.

Falk Jones knows that a big question mark for the area was the impact of the late season snowfall in April.

“There were a lot of folks who were really worried about the wheat, and rightly so,” said Falk Jones. “In all reality, it turns out those acres in our area mostly benefitted from that moisture. We are seeing some of those higher yields because of the moisture gained in that snow.”

Proteins were also highly variable in the area, but topped out at 14 percent. To learn more about protein, check out Jeanne’s summary from how it’s formed to how to boost yours at http://kswheat.com/all-about-protein.