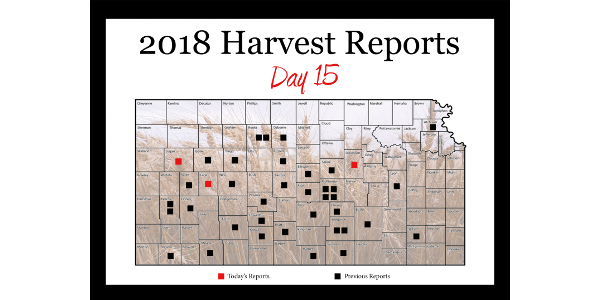 Bryson Haverkamp, Technical Service Representative with Indigo Ag, reported that harvest in his Eastern Kansas territory is pretty well wrapped up. The first cuts came almost one month ago, on June 9, and quickly progressed. Yields for the region were highly variable, but he estimates that the average was between 35-40 bushels per acre.

“The variability is a combination of planting dates, crop rotation, moisture at planting and whether or not the field got a timely rain or two,” said Haverkamp. “The first spot that I heard of cutting was near the Hope/Herrington area. They were right in this rain dead zone, so the wheat was definitely dry and ready to go.”

Test weights in the area ranged from about 58-60 pounds per bushel. Proteins are also higher than recent years with an estimated average of about 13.5 percent.

“Yields are down across the board this year, but it seems to be a higher quality crop,” said Haverkamp.

Logan Campbell, Dighton Area Grain Manager at the Garden City Coop Inc in Lane County, reported that the county was heavily affected by hail. They took in their first load on June 16, but rain caused some delays.

“I would say that we are about 65 to 70 percent of the way done with harvest in the area. With the hail damage that we have had, it’s hard to give an exact number on how far along we are. An average year for the area is about six to eight million bushels, and as of June 3, we were just a hair below 5 million bushels.” Campbell attributes this to fewer acres begin planted and loss of acres from a May 14 hail storm.

“The storm stretched from the western side to the eastern side of the county, taking out a five mile swath, which was about one-third of our harvest,” he said. “It affected us pretty significantly and the storm didn’t leave anything behind.”

Yields have ranged considerably, from 10 to 50 bushels per acre. Campbell said, “Test weights started out amazing at 65 pounds per bushel, but then it rained. From there they dropped. The average from the northern area of Lane, which is what I oversee, has been 60 pounds per bushel.” He reported that proteins have been averaging from 12.5 to 13 percent.

Lisa Schemm, a farmer in Wallace and Logan Counties, reported half of her family’s planted wheat acres had been hailed out this year. The remaining acres had more freeze damage than the Schemms had expected, which took its toll on yields, and the family wrapped up their harvest in about four days. Schemm estimates that her area is about 90 percent harvested. Test weights held up ‘really well’ with Lisa seeing up to 62-63 pound test weights. She also added that protein in the area was much higher than in recent years.

“If we’re not going to have the yields, the increasing price and the protein premiums definitely help,” said Schemm. “We were ready for this crop to be done with so we can move on to the next.”