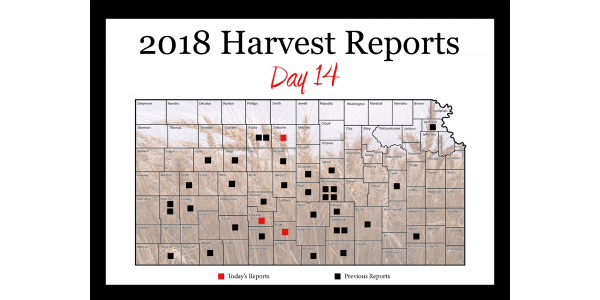 Due to harvest rains and increased weed pressure, Kansas State University Department of Agronomy updated and reissued its preharvest weed control in wheat. Information about products available, advantages, disadvantages and preharvest intervals can be found at https://webapp.agron.ksu.edu/agr_social/eu_article.throck?article_id=1877.

Dell Princ, general manager of Midway Coop Association in Osborne County, reported being 80 percent done with harvest in the area, after starting with their first load on June 14.

“Wheat acres are down, the lowest it has been in many years,” he said.

Princ said yields are anywhere from 15 to 35 bushels per acre, with a lot of weeds because of the rain. Prior to rain, he said the test weights were 62 pounds per bushel, but they have dropped four points to 58 pounds per bushel after the rain. He says proteins are averaging around 13.5 percent.

“Yields are down 40 percent in comparison to previous years, but proteins are higher than normal,” Princ said. “We had two rains in the area, and we would be done by now if we hadn’t. We were set back about 10 days from the rain.”

Because of the rain, Prince said the quality of the wheat has gone down and dockage has become more prevalent because of weeds in the area.

Jim Hern, manager of Skyland Grain, LLC. in Pratt County, said they finished their wheat harvest this past Saturday, June 30, taking in about 60 to 65 percent of bushels compared to an average year.

He reported yields to be about 35 bushels per acre, test weights averaging in a range of 62 to 65 pounds per bushel, and proteins anywhere from 10.5 to 12.5 percent.

“Compared to the past two years, which were phenomenal, it was a below average or right at the average year for us,” Hern said. “The rain was a lifesaver for the fields in the area. It was almost too late, but we’re glad that we got it.”

Even though the rain was a little late, Hern said harvest went a lot better than what was expected in April.

“We thought there was not going to be much out there in the fields, but we were surprised of the results,” Hern said. “Besides all that, I’m just glad it’s over!”

Lightcap also said the rain halted their harvest, causing them to completely shut down. Rain also caused a weed problem for fields in the area. He said farmers sprayed their fields because of the weeds, making them wait for an extra week to cut the remaining fields.

“The thing that stuck out most from this year’s harvest was the test weights,” Lightcap said. “I had assumed proteins would be higher this year, but I was pleasantly surprised to see test weights higher, as well.”

The fruits of our labors