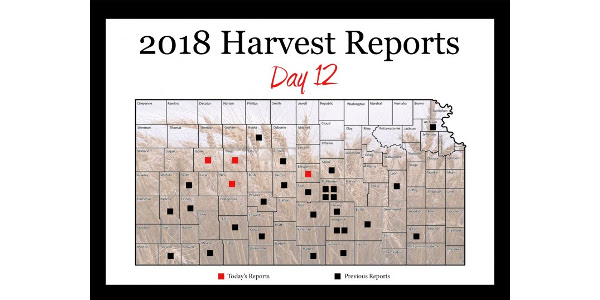 It’s another day of blazing, hot temperatures, and the hot wind continues to dry down wheat fields.

Dwight Elmore, location manager of Ellsworth Coop in Ellsworth County, said they are about 85 to 90 percent done with harvest. He said some of their numbers lowered because of the rain but not too much.

“Yields are better than expected, given the growing season,” Elmore said, “and we are seeing anywhere from 20 bushels per acre up to 60 bushels per acre. Our test weights started off strong averaging around 62 to 62.5 pounds per bushel. Proteins are coming in around 12 to mid-13 percent.”

In comparison to past years, Elmore said their overall yields in the area are less than their five year average but their proteins are higher. The rain only set them back two to three days.

“If we hadn’t gotten any rain, we would have been done sooner, but it was a nice trade off to have the rain to benefit the fall crops, with about an inch and half of rain, and we’re grateful for that,” Elmore said.

Elmore also said they have seen dockage rates higher than normal and are attributing this to the size of the wheat kernel being smaller than past years.

Gary Gantz, location manager of D.E. Bondurant Grain Co. in Ness County, said they took in their first load on June 17 and are about 50 percent harvested in the area.

Gantz reported their yields to be in a wide range of 20 to 45 bushels per acre. Prior to the rain, he said the test weights were 61 to 63 pounds per bushel. After the rain, they were around 58.5 to 60 pounds per bushel. Compared to past years, Gantz said the quality of the protein and test weights are better than the past four years, and yields are slightly below average.

“There has been very little disease pressure this year, whereas the past two to three years we have had some problems with wheat streak mosaic (virus) and wheat rust,” Gantz said. “But this year we didn’t have any sign of disease.”

Some of the fields in Ness County were hit with a hail storm, which impacted about 10 to 20 percent of the fields.

Larry Glenn, location manager of Frontier Ag Inc., of Gove County, said they are just beginning their harvest in the area. He said they took in about four loads this week and maybe five to six before the rain.

“The rain has limited the amount of harvest we have done,” Glenn said. “The wheat is dry enough but the fields are wet.

“There is a chance of rain on Sunday and I don’t want to wish away the rain because it is good for us,” Glenn continued, “but if we could just hold off on the rain for a few more days, we could knock out the rest of our fields.”

Even though they have not taken in much in the area, Glenn believes the quality will be good. He said compared to other years, the protein will be higher, along with test weights, and yields will be below average.

Taylor Myers, location manager of Frontier Ag Inc., in Trego County, said they are just beginning with their harvest. For yield, Myers said he has heard anywhere from 30 to 40 bushels per acre, test weights are 60 pounds per bushel and moisture is 12 – 13 percent.

The yields are below average for Trego County, Myers said.

“Rain has definitely impacted us,” Myers said. “It looks like we’ll be having about an average year, where we have good quality wheat, but not as many bushels out there as the people would like.”