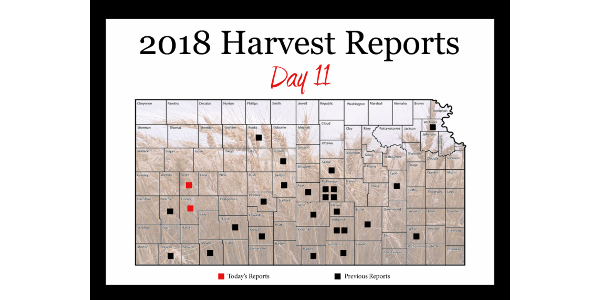 After widespread rains this past weekend, Kansas wheat harvest was at a halt on Monday, but a few farmers were able to get back in the fields late in the day on Tuesday.

Wednesday’s scorching temperatures and strong winds allowed combines to begin to roll again; however, humidity levels are high and the ground is still pretty wet, even though the wheat is ready.

According to the June 25 USDA/NASS Kansas Crop Progress Report, winter wheat coloring was 98 percent. Mature was 85 percent, near 82 last year, and harvested was 52 percent, ahead of 44 last year, and well ahead of 32 for the five-year average. Winter wheat condition rated 15 percent very poor, 31 poor, 38 fair, 14 good, and 2 excellent.

Chris Wagner, vice president of grain at Garden City Co-op in Finney County, reported that harvest began on June 12. The rain set them back about five days to a week. He said they are only about 20 to 25 percent harvested, and they don’t expect to be done with harvest for about two more weeks, if they don’t receive any more moisture.

However, the rain has had a positive impact on the fall crops in the area. Wagner said test weights are down, about half a point to a full point, coming in on average around 60.5 pounds per bushel.

“Our yields are about normal, coming in around 20 to 40 bushels per acre,” Wagner said. “There are some outliers that are coming in higher than others, but we are mainly getting our normal numbers.”

Wagner also said samples of protein are running around 12 percent.

“In comparison to previous years, right now yields are lower and quality is right on track,” Wagner said.

Jason Baker, location manager of Scott Coop in Scott County said they have barely started on their harvest, but from what they have seen so far, people are pleased with the results. He reported that there were a few farmers that began harvest on June 15 through the 17, but they were rained out on June 18. They were able to start harvesting again on June 26.

“I have heard people are pleased, and there is more out there in the fields than they were expecting,” Baker said.

Baker reported test weights are lower and proteins are higher than normal. Fields have had proteins in a wide range of 10.5 percent to 15.5 percent, where as a company, Baker said they average around 12.5 percent for protein. Test weight has been averaging around 58 to 60 pounds per bushel, some of which are hurting because of the drought in the area.

Baker also said there were above average abandonment acres destroyed early that were scratched and turned to corn or fallow.

“The fields got hit with a really bad hail storm that wiped out a bunch of fields,” Baker said. “The weekend rain also came with some hail again. A positive for this year is there is no sign of (wheat streak) mosaic (virus) in the fields, which was a problem last year.”

There is another chance of rain this coming weekend, so Baker thinks in Scott City they will be most of the way done with harvest by the following weekend, July 6 through 9.

“Overall, I would say that we are in good shape,” Baker said. “The rain is always a good thing; it just didn’t have the best timing for us.”