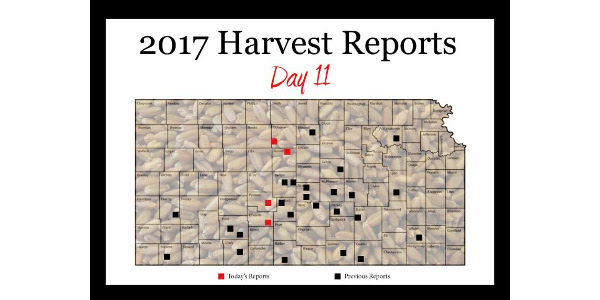 According to USDA’s National Agricultural Statistics Service, for the week ending June 25, 2017, winter wheat harvest was in full swing across the state. Winter wheat condition rated 8 percent very poor, 15 poor, 31 fair, 40 good, and 6 excellent. Winter wheat mature was 85 percent. Harvested was 48 percent, behind 53 last year, but near 47 for the five-year average.

Harvest has been going since June 15 in Larned, Kansas, according to Kim Barnes, CFO and Grain Merchandiser of Pawnee County Coop Association. Although there has been some severe weather in the area like hail damage, farmers have taken in over two million bushels of wheat to the elevator and are more than 60 percent finished.

“We’ve been test cutting today due to a rain delay, but we should get back in the field hopefully tomorrow,” Barnes said.

Proteins have been ranging around 10 to 11 in the area, he reported. Disease has been an issue for many counties in Kansas this year, and two big ones have been leaf rust and wheat streak mosaic virus.

“I’ve seen a little bit of everything for disease,” said Barnes.

He said yields have been above average this harvest, even with the severe weather, and moisture has jumped up quite a bit.

“Overall, harvest has been above average this year. Prices have been better compared to last year. Last week we saw prices up to $3.80 and even hit $4.01,” he said.

In Luray, Kansas, Jennifer Princ, branch manager at Midway Coop, said harvest has been going on since June 13.

“Harvest has seemed to drag on this year due to the scattered showers,” she said.

Around 60 percent of wheat has been taken in, and Princ is hopeful they will be done with harvest soon. Yields have been averaging 55, but she said she has heard anywhere from 15 to 85.

Test weights have been a little scattered due to rain, but before the big rain hit, they were averaging around 61. Proteins have stayed around 10.95 all throughout harvest, she added. Princ said she has seen a lot of wheat streak mosaic virus and barley yellow dwarf in her area.

In Natoma, Kansas, Dale Beisner, Location Coordinator at Midland Marketing, said they are about halfway done with harvest.

“Yields have gone anywhere from 20 to 70, so you take your pick,” said Beisner.

Test weights have been averaging 61 ½, and proteins have been around 10.5 for the area. Harvest in Natoma has been rolling since Monday, June 19. Beisner also reported wheat streak mosaic virus.

“Mosaic has been our main disease issue in the area for sure,” said Beisner.

Brian Bigler, branch manager of ADM Grain in Trousdale, Kansas, said they have only had to stop harvest twice, due to long days and a rain delay. He reported yields have been ranging in the mid 40’s, and test weights were 59-60. 160 percent of the average for wheat in the area has already been taken in, so he believes they will be done with harvest soon.

Proteins have been around 10.8, he added. He also mentioned leaf rust was a problem in that area.