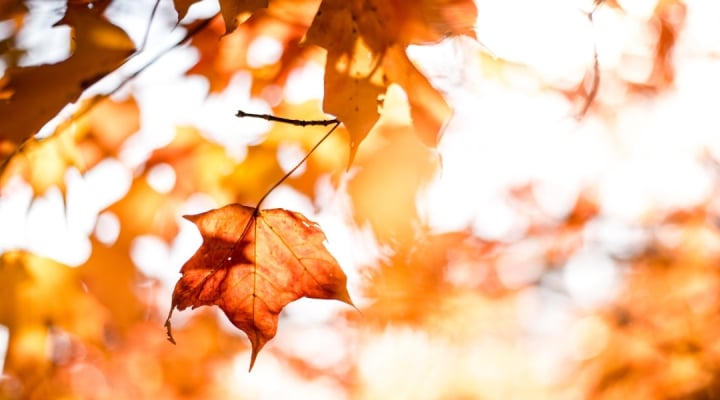 The four main groups of biochemicals responsible for fall colors are chlorophyll, carotenoids, anthocyanins and tannins. Each has its own color and chemistry. Varying amounts of these chemicals give subtle variations in color from one leaf to the next or even from tree-to-tree. (Matt/Unsplash)

FARGO, N.D. — The sumacs started changing color last week. I noticed them on my drive to work on Tuesday morning. I look forward to seeing fall colors each year. While yellow is dominant in our forests, splashes of red, burgundy and sometimes orange brighten up the scenery. The chemistry of autumn colors is fascinating.

The four main groups of biochemicals responsible for fall colors are chlorophyll, carotenoids, anthocyanins and tannins. Each has its own color and chemistry. Varying amounts of these chemicals give subtle variations in color from one leaf to the next or even from tree-to-tree.

The green color that we see in plant leaves throughout the spring and summer is due to the pigment called chlorophyll. Chlorophyll is the main compound that gathers energy from sunlight in the process of photosynthesis. Chlorophyll absorbs both the blue and the red wavelengths from sunlight and reflects the green wavelengths.

Nitrogen is one of the main components of chlorophyll. As days get shorter and temperatures get cooler, chlorophyll is broken down faster than it’s produced. The majority of the nitrogen migrates back to the twigs, being placed in storage for next year’s new growth. As chlorophyll breaks down, the carotenoids are revealed.

Many of the yellows and oranges we see in nature are the result of the various carotenoid compounds. Carotenoids play a minor role in photosynthesis, so they’re present throughout the growing season but are only revealed when chlorophyll breaks down.

Carotenoids are dominant in North Dakota’s native trees each fall. We see a lot of yellow. Some years the leaves are a bright, golden yellow while other years may produce soft, dull yellow-to-brown foliage. Brilliant colors are more often seen when fall weather is warm, sunny days and cool nights between 32 and 45 degrees Fahrenheit.

The reds and purples we see – like in the sumacs I saw last week – are due to the anthocyanin compounds. These are produced when sugars combine with compounds called anthocyanidins. Many things affect the exact color produced by anthocyanins, including the pH (acidity or alkalinity) of the cell sap in the leaves. With an acid pH, anthocyanins are often red; in alkaline solution they become purple-to-blue.

Many tree cultivars are known for their purple color during the growing season. Purple-leaf sandcherry, ‘Schubert’ (or ‘Canada Red’) chokecherry and ‘Thunderchild’ flowering crabapple are found in many North Dakota cities and towns.

A number of native shrubs and vines produce red and burgundy fall colors in North Dakota. The sumacs are usually brilliant red. My wife learned a technique to transfer the sumacs’ color onto fabric that she then works into her quilts. It’s pretty cool.

Viburnums are often a muted burgundy-red. The native viburnums in North Dakota include American cranberrybush, arrowwood and nannyberry. All of the viburnums have edible fruit, though the only one I’ve eaten is cranberrybush. It’s awfully tart!

Even poison ivy leaves can become a muted purple in the fall. Let’s face it though, that’s really the only good thing that I can say about poison ivy.

Does dairy benefit from the NFL partnership?

Fertilizer prices for 2022 crop will be near or above historic highs
October 5, 2021