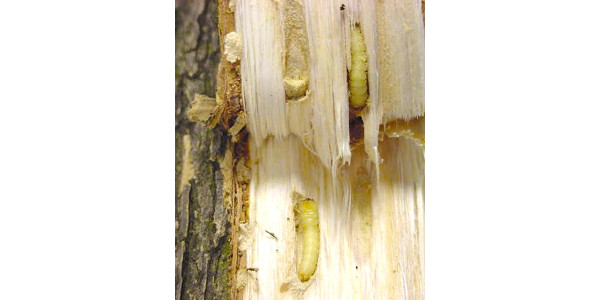 Green ash trees make up 60% of North Dakota's native forests. Pictured above are EAB larva inside an ash tree. (USDA)

FARGO, N.D. — Every year, just before Memorial Day, I work with colleagues at the North Dakota Forest Service (NDFS) and North Dakota Department of Agriculture (NDDA) to do an informational campaign during “Emerald Ash Borer Awareness Week.”

Emerald ash borer (EAB) is an insect from Asia that attacks and kills ash trees, such as our native green ash and black ash.

We don’t exactly “celebrate” the week, but instead we use it as an opportunity to remind people about the importance of tree species diversity and the role of firewood in the spread of this harmful insect.

As a scientist, though, I’d like to start with some data:

Every year, my colleagues and I inspect dozens of ash trees around the state to see if they’re infested with EAB. So far, we’ve found no EAB, and we’re hoping the same holds true for 2021. But the insect gets closer every year, and that’s worrisome, given the large percent of ash trees in our forests.

Fortunately, we have several things we can do to minimize the risk of EAB. First, when using firewood, “Buy it where you burn it.” When you go camping, get your firewood at your destination; don’t bring it with you. Moving infested firewood is one of the main methods of EAB spread. Most campgrounds have firewood for sale on-site or they list nearby vendors.

Finally, if you think your ash trees might be infested with EAB, please don’t hesitate to contact your county Extension agent, the NDFS or the NDDA to arrange for a site visit. If this destructive insect is in North Dakota, we want to find it sooner rather than later.

I’m grateful that EAB hasn’t been found here yet. Every year that we delay gives us more time to plant new/different tree species. What will you plant this year?

Producers may be dealing with winter-killed alfalfa

Tools for Midwestern farmers to thrive

Sudden change in diet may cause bovine fog fever
September 15, 2021