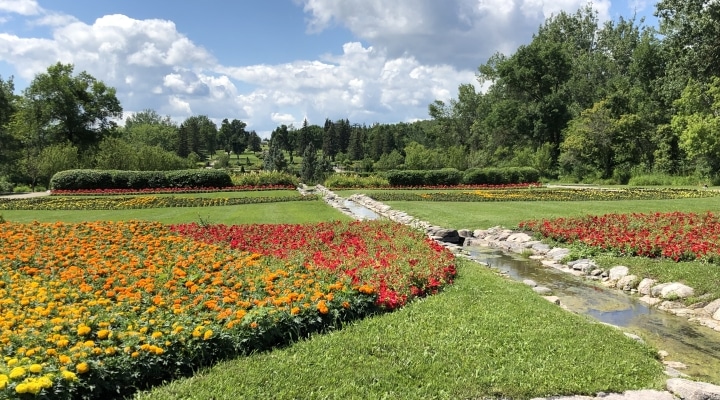 A waterway marks the international border in the formal garden. (Courtesy Photo)

Straddling the border between North Dakota and Manitoba, the garden is a horticultural and historical treasure that is celebrating the 90th anniversary of its dedication.

Henry J. Moore advocated for a garden to be built on the U.S.-Canadian border to commemorate the longest peaceful international border. A site was chosen near the geographical center of North America and over 50,000 Americans and Canadians traveled to the site for the July 14, 1932, groundbreaking and dedication.

The International Peace Garden is now the largest public garden in North Dakota and encompasses 2,400 acres. Constructed in a formal style, a water feature runs along the border and symmetrical gardens in both countries mirror one another.

At the heart of the formal gardens is the sunken garden which displays thousands of perennials and ornamental shrubs. It is a riot of color that changes with the perennials that come into bloom.

The gardens this year seem extra vibrant. New horticultural designers have breathed new life and creativity into the gardens. The huge monarch butterfly-shaped garden planted in orange, yellow and black annuals had me wishing for a drone to get the full picture.

Creative touches abound. Musical art celebrates the close proximity of the International Music Camp. A giant treble clef and a bass clef float above a sea of marigolds and petunias. Especially clever this year is the use of an old piano on the upper terrace. The upright piano is draped in petunias, sweet potato vine and succulents.

The 9/11 Memorial is a fairly recent addition and adds a somber note. The memorial is comprised of iron girders from the fallen World Trade Center in New York City. The adjacent landscape is less colorful as a response to the seriousness of this event.

The famous floral clock is still an integral part of the garden and displays thousands of annuals. This year’s design is in contrasting shades of maroon, yellow and silver. The original clock mechanism was donated by the Bulova Watch Company in 1966 but was replaced in 2005.

The International Peace Garden also has a world class collection of cacti and succulents. However, the conservatory that houses the collection is currently closed for construction.

August and early September is a fantastic time to visit the garden and seek inspiration for your own garden. If you have not recently visited the International Peace Garden, the 90th anniversary year is the time to do so.

Before you go, make sure to pack your passport or other forms of identification to facilitate your return through U.S. Customs and Border Protection.