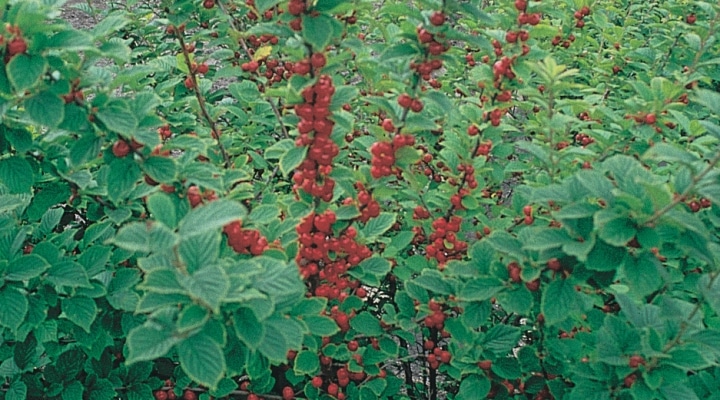 Nanking cherries, seen above, are an example of a wild-harvested food that comes from the forest. (Courtesy Photo)

FARGO, N.D. — Last weekend, we finally got enough snow to cover the ground. Temperatures have dropped so the snow likely will stay until spring. That means it’s time to start having evening fires in the fireplace!

I look forward to this season every year. A fire is just plain cozy. The physical warmth of the fire combined with dancing flames is entertainment for the eyes. I love the smell of wood smoke, too. Fortunately, we have a good chimney and the only way I can smell the smoke is by going outside.

World-wide, firewood is the most commonly harvested ‘non-timber forest product’, or NTFP. In North Dakota, I would guess that we harvest more firewood than timber from our forests and shelterbelts. The timber business in North Dakota is pretty small. Most of the sawmills are small operations and many of the owners mill that lumber on a part-time basis.

But there’s a lot of firewood.

In the last 25 to 30 years, outdoor wood-burning furnaces have become much more common. They’re a great way to heat a home, if you have a good supply of fuel available. In this case good means, “a lot and relatively cheap”. On my drive home, there are two or three locations where I can smell the wood smoke as I pass by each day. That aroma puts a smile on my face.

There are a huge number of items covered under the broader heading of non-timber forest products.

Wild-harvested foods are second after firewood. Most of us have picked juneberries, chokecherries or any number of different fruits from the forest or along a windbreak. Sometimes, we’re just having a snack, but other times we’re making jams, jellies or other treats.

My friend Steve has made some outstanding wine from Nanking cherries, harvested from a local windbreak. Some people have even incorporated NTFPs into their business, even in North Dakota. For a listing of North Dakota-based businesses, check out the Pride of Dakota list at https://www.prideofdakota.nd.gov/foodandbeverage/.

I have to admit though, that I still haven’t developed a taste for buffaloberries.

Making a living solely from specialty forest products can be tough. Some years have great production while other years a late spring frost may kill the flowers and therefore knock back the amount of fruit produced.

Seasonality is a big issue. Those food-based products are ready for harvest at only specific times of the year. Maple syrup is produced in a two-to-four-week window in the early spring, before bud break. In boxelders and in sugar maple trees, the sap flows only when daytime temperatures are above freezing and nights are below freezing. Long-term storage isn’t realistic for maple sap, so it’s processed into syrup right away. And for the other 11 months of the year, all of the equipment sits idle and syrup is stored.

Another issue with seasonality is that it can be driven by the market. Christmas trees, obviously, are harvested only in November and December. Harvesting evergreen boughs, for use by florists and others, extends beyond the Christmas-tree season, starting in October and ending in January. Beyond that time frame, the demand simply isn’t there.

Even the demand for firewood is somewhat seasonal, at least here in the U.S. But that season can last quite a while. I’m looking forward to those cold nights and the warmth of our evening fires.

It’s too bad that we can’t grow chestnuts here in North Dakota. Then I could roast them on the open fire.