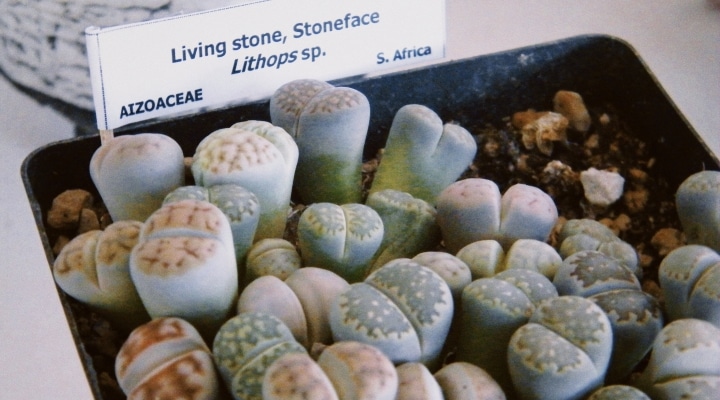 Lithops prefer a very sandy, quick draining soil. A soil made for cacti and succulents would work, or you can mix coarse sand with potting soil. (summertrain/Unsplash)

FARGO, N.D. — It is no secret that I have a passion for soil, rocks and plants. There has been a recent addition to my houseplant collection, courtesy of a gardener friend, which has combined two of my three passions. I added a lithops, also called a living stone plant.

Lithops are fascinating. If you grow them or have seen one, you know why. They look other-worldly but are aptly named. When I brought my lithops home, I waited until my kids noticed the plant just to see what they would say. When they finally noticed the plant, they asked, “Where did the rock that looks like it is alive come from?”

Lithops are native to Africa. They are unique in that they have very fleshy leaves and no stems. The leaves are partially joined and converted into a single solid mass. They are sometimes referred to as plant bodies. There is usually a groove or slit where the leaves join. The plant-bodies are colored and patterned and resemble stones. The bodies are conical or cylindrical. They live in the hottest desert conditions and the leaves or plant bodies are used to store water.

On a side note, lithops is both the singular and plural form of the word and is the scientific and common name. So, no confusion on names for this plant.

In their native habitat, the lithops grow buried into the soil up to the top of their plant bodies. This helps camouflage them as rocks. When we grow them as houseplants, they should be raised out of the soil to prevent rot.

Lithops prefer a very sandy, quick draining soil. A soil made for cacti and succulents would work, or you can mix coarse sand with potting soil. Chicken grit, which is a mixture of coarse sand, pebbles and small chunks of rock, can also be used as potting soil.

Lithops prefer bright light and can stretch or turn color if they do not have enough light.

Watering will be the most challenging task for lithops.

Lithops are succulents and should be left to dry out between waterings. Warning, if you have killed succulents with overwatering, prepare yourself as lithops need water only during certain times.

Lithops will tend to go dormant during the summertime. They should be watered sparingly during this time and not fertilized. When they are actively growing, they can be watered more frequently and fertilized. But don’t water when new leaves are forming or when it’s blooming.

Are you confused? That makes at least two of us. The University of Wisconsin-Madison Extension has a great article on lithops, and it dives into more information on their history and care than I can fit in this article. When you have a minute and want to learn more, visit https://hort.extension.wisc.edu/articles/living-stones-lithops/.

After one month in my care, my lithops is doing well. I have only watered it once. Time will tell, especially when my son occasionally pulls it out of the soil because he still doesn’t think it is a plant! Happy gardening!