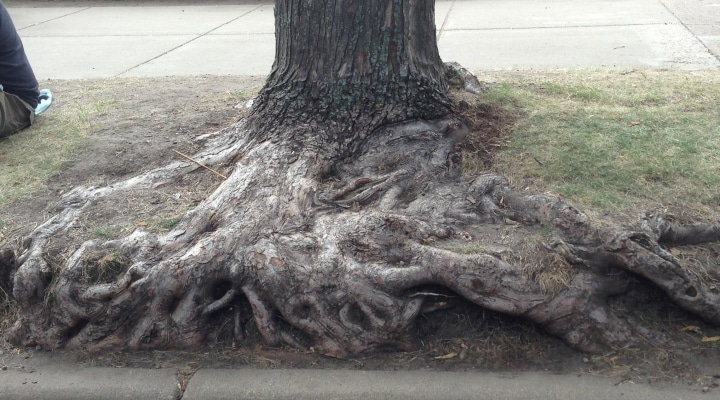 Last week, I received a question from a colleague who read that the maximum lifespan of green ash trees in the Badlands was 100 years. Did I agree with that statement?

In other parts of North Dakota, I’ve found a number of green ash trees that were in their 160s and 170s. The oldest one I’ve found was 185 years old. That tree was harvested for timber in 2007.

So, how old is old? What’s the maximum age that a green ash tree will live to? The only way we can know for sure is to wait until trees die from natural causes, and then count the rings. That doesn’t happen too often. I wonder how long that 185-year-old tree would have lived if it hadn’t been harvested.

Though the Badlands provide a harsh environment, so do our cities. I doubt that a green ash tree would survive to 185 years along an urban street. In ‘tree-planting pits,’ those small enclosed areas with limited soil volume, trees are often doomed to a very short life. One report estimated that trees in these situations live an average of only seven years. That’s short, especially when we consider the amount of time and money spent on planting and maintaining trees in our downtown areas.

But it’s not all doom and gloom. Ponderosa pines are native to southwestern North Dakota, on the edge of the Badlands. Some trees in this area have lived for more than 500 years. Two trees killed by a wildfire in 2004 dated back to the 1670s. They were over 430 years old when they died. Amazing!

Back in 2014, researchers found a 383-year-old cottonwood along the Little Missouri River. Most people don’t think of cottonwood as a long-lived species, because they grow so fast. However, the research has clearly shown that cottonwoods can live several hundred years.

Another long-lived tree species is bur oak. The majority of the ‘old’ bur oak trees in North Dakota date back to settlement times. People needed building material and fuel, and the small forests took quite a hit as more and more people arrived. Very few trees were spared, though we occasionally find an oak tree that dates to the 1840s, 1820s or even into the 1700s. But those are rare. The oldest bur oak we ever found dated to the 1550s. It was over 450 years old when it came down. Wow!

So, is a 60-year-old tree considered to be ‘old’? Like most things, it depends. A lot of tree species can live long lives, even in the midst of a broader prairie environment.

In my early 50s, I still feel like a kid. I won’t live as long as those ash, oak or cottonwood trees, but I’ve got many years left in me. Unless someone harvests me for firewood.