While temperatures over the weekend are forecast to trend below normal, little rainfall is expected across the Upper Plains. (U.S. Department of Agriculture, Flickr/Creative Commons)

Drought conditions continue to expand and intensify in the Upper Plains. North Dakota and eastern Montana are currently experiencing the worst of the drought conditions, but severe and extreme drought is growing in South Dakota as well. Increasing areas of abnormal dryness have spread down into Nebraska and over into parts of Iowa as well. As of June 27th, about 25% of North Dakota was categorized as being in extreme drought, 22% in severe drought, 20% in moderate drought, and 33% with abnormal dryness. In South Dakota, 2.1% was in extreme drought, 29.3% in severe drought, 25.3% in moderate drought, 34% with abnormal dryness, and only 9.3% with no drought conditions at all. Nearly 68% of Nebraska is currently categorized as being abnormally dry, while about 45% of Iowa is experiencing some level of abnormal dryness as well. While temperatures over the weekend are forecast to trend below normal, little rainfall is expected for these states. However, some showers are expected to move into Nebraska early next week, possibly bringing relief to the abnormal dryness for some. This rain will then move into Iowa and northern Missouri, possibly bringing very heavy rain at times, and some relief as well. The Dakotas, however, are still forecast to receive little to no rainfall over the next 2 weeks. While sparse rain will already exacerbate the drought, extreme heat is in the forecast for the Upper Plains beginning next week.

Above normal temperature trends will begin to spread into the Midwest early next week and gradually grow in intensity through mid-week. By mid-week, highs are expected to be 5-15F above normal in the Dakotas, Nebraska, and Minnesota. By the end of the week, the Dakotas will likely see highs topping out near, or even above in some parts, 100F. High temperatures are expected to remain very hot for multiple days. These hot and dry conditions will allow drought conditions to grow rapidly and wreak havoc on crops in the area. As of June 26th, only 56% of the corn crop was rated as being in good/excellent condition, while 13% was rated as poor/very poor. We expect corn conditions to worsen following this spell of hot and dry conditions. Last year during the same week, 81% of the crop was rated as being in good/excellent condition. Similarly, in South Dakota, only 46% of the corn is currently rated as being in good/excellent condition. This is down from 73% the same time last year. 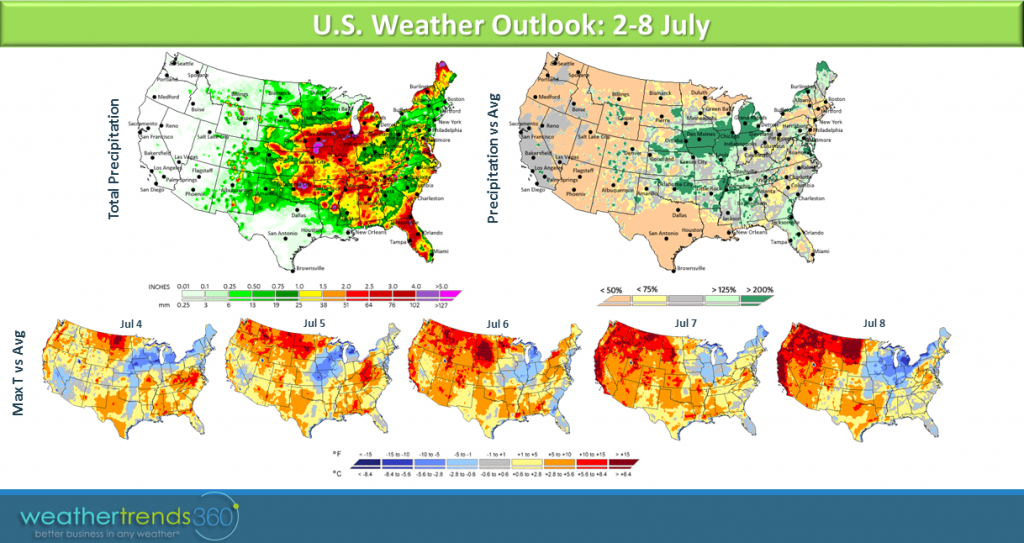 While corn condition in the Dakotas is impacted by drought, condition ratings in other Corn Belt states are below that of last year as well. Overall, 67% of the crop is currently categorized as good/excellent, down from last year’s 75%, while 8% is labelled as poor/very poor, up from last year’s 5%. Current good/excellent ratings vs the same time last year are as follows: Nebraska -5%, Minnesota -3%, Iowa 0%, Missouri +3%, Illinois -9%, Indiana -27%, Ohio -9%.