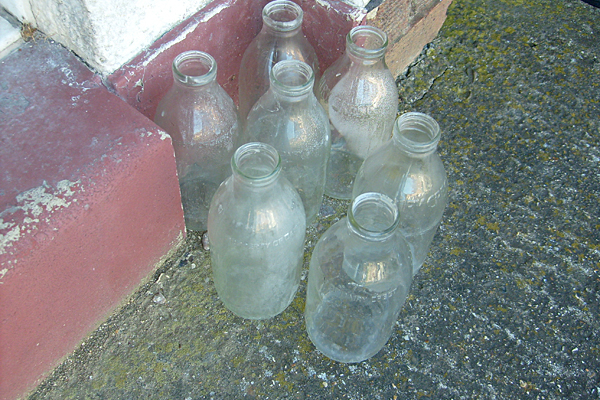 On 100 acres of pasture tucked in the rolling hills, sits a barn just six minutes outside of Belpre and Little Hocking. It's called Twin Pines Dairy, and that's where a family of five is forging a new path down an old-fashioned road. (Wikimedia Commons)

BELPRE, Ohio (AP) — On 100 acres of pasture tucked in the rolling hills, sits a barn just six minutes outside of Belpre and Little Hocking.

It’s called Twin Pines Dairy, and that’s where a family of five is forging a new path down an old-fashioned road.

“My Grandpa and my Dad were dairy farmers down near Parkersburg,” Dave Florence said after a recent morning milking. “And just a year and a half before I was born, they switched from the old-fashioned glass bottle way to the bigger commercial way used by most places.”

But now, with his wife Tara, daughter Allison, 16, and twin 13-year-old sons, Austin and Adam, there’s a plan in motion to switch back.

They hope by springtime to have a new pasteurization and bottling process built, certified and selling old-fashioned milk from the farm’s storefront and in local coffee shops and small markets in the Mid-Ohio Valley.

“It’s an opportunity to provide a different product, not saying the commercial way is better or worse, we just want to do it a little different, in a way that can be more intimate,” Florence said. “This way, we can keep it in the family and stay in business with a small farm giving those who want to know where their milk came from that answer.”

All five family members are up before dawn each day, and are feeding, milking and caring for their 100 head before breakfast.

“That’s common with cow farmers, but you start with them and take care of their needs before you ever take care of your own,” Florence said. “There are people that think farmers are out to be cruel to or abuse animals, but they see their needs met first. They’re our family.”

“They know it’s time, they can feel it,” Florence explained.

He said his sons help to herd the cows into a pen and one will man a sliding door in the milking barn that allows the cows to file in.

“They really don’t fight it, because this feed in here is like candy to them,” he said.

Lined diagonally on an elevated concrete stoop, each cow has its own spot to nibble while prepared for milking.

Florence sanitized each teat with an iodine sanitizing solution, then cleared the teats of the first squirt of milk by a pull, called forestrip.

“That just makes sure we’ve cleared the line and the milk coming out is pure,” he explained.

Then Allison attached the milking units which pump all four teats at the same time.

“It sucks and then it lets go,” she said. “That takes maybe five minutes to finish milking the cow.”

Each group of six cycles through the process in 11 minutes before they’re released back to go lay down in their free stall, or drink water and eat feed or roam about the pasture.

“They’re free to do whatever they want on their own time, if they want to go stand out in the field they can, if they want to lay down they can,” said Florence, pointing out a pregnant cow as another reached out for Allison to scratch her head.

The milk then moves through overhead lines into the next room over where it’s stored in a refrigerated tank that’s drained and trucked to be pasteurized at a plant every other night.

Dave Florence grew up with the tales of a simpler pasteurization process and a more intimate relationship with the consumers of his family’s dairy products.

His father and grandfather had a delivery truck and glass bottles and they milked into pales.

“Right now, with the sheer volume the huge plants are producing for the big grocery stores it’s all about efficiency and passing that milk through the process as quickly and safely as possible,” he explained.

But what gets lost in that quick time and high-temperature pasteurization and homogenization are some of the good bacteria, he said.

“So, we’re going back down in temperature to 145 degrees for 30 minutes, not the 180 to 200 degrees for one to two seconds,” Florence said. “That kills off the bad but keeps the good and creates a rich taste.”

He said it’s a niche market that some consumers are looking for, not only supporting the local dairy farmer but wanting to be more aware of and trust what’s in the foods they’re consuming.

“It’s all regulated and Allison and I both just got certified to test to prove no antibiotics are in any batch of milk, that’s already done at the plant but when we take on the bottling we’ll have to do the testing too,” said Florence.

The push to go old school was not only influenced by researching scattered small farms across the country taking on the micro-market, but also by the costs to produce, market and sell the milk to larger chains.

“And, right now in this industry, these small farms are closing,” he said. “We’re getting killed with the costs just to get it to the consumer.”

His family started in its dairy business in 1925, and Florence continued the tradition after opening Twin Pines in 2000.

But now, at 48, his knees don’t keep up with the labor the way his younger self could. And he relies more on the family team to carry out the feeding of calves, heifers and milk cows, as he supervises and milks.

“I was getting to the point where I couldn’t keep running this by myself with how much it costs but the kids are interested in continuing this, so we thought about making a change,” he said.

“It’s something our family has done and we’re good at,” Allison said.

“And I like driving all the tractors,” laughed Austin.

“This is for them, they have their strengths here on the farm and what they like doing, and they’ve proved they can take care of all the chores when I’ve had to leave in an emergency,” Florence said. “[Allison] is super good with the cows and she’s got the numbers sense and these boys-you’re not going to get a better tractor driver or harder workers than these two.”

The processing building has been under construction through the fall and it has exterior walls and a roof above.

Next on the list are fiberglass interior walls and the installation of equipment, a walk-in freezer and the fridges to sell whole and 2 percent milk with additional flavors of chocolate, strawberry and seasonal flavors like pumpkin spice.

“Plus, we’ll sell drinkable yogurts and maybe some beef here too,” said Florence. “And we’ll have a window here in the storefront where you can come in and watch the whole process if you’d like from the milk coming in through a line to being bottled after it’s pasteurized.”