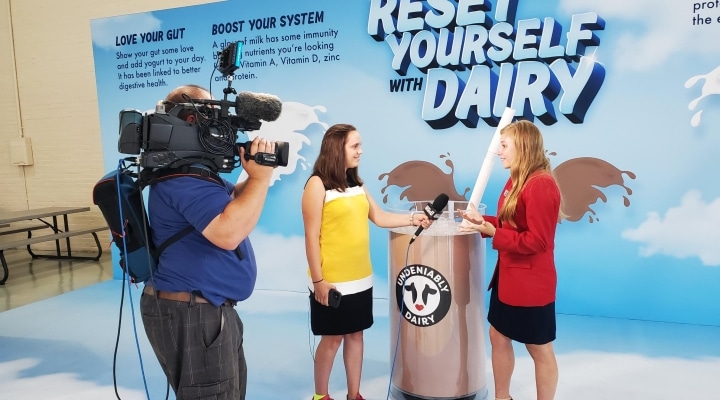 “We appreciate the support of our county promotion committees and volunteers during all the dairy events during the state fair,” said ADA North East John Chrisman. “Because of them, we are able to have one-on-one conversations with many consumers and these personal connections are invaluable to building trust in dairy.”

More than 80 volunteers from 12 county dairy promotion committees also helped ADA North East staff the “Reset Yourself with Dairy” booth during the fair. The booth featured a giant display geared toward the Gen Z audience, reminding them to “let milk help you reach new heights,” with two sets of milk splash “wings” and a giant glass of chocolate milk for photo opportunities. The display also included a giant milk carton with a QR code fair-goers could scan to get additional dairy messaging.

Onondaga County Dairy Advocate Claire Robinson volunteered in the “Reset Yourself with Dairy” booth, and said, “I loved talking to kids my age about something I love so much, but it was a great opportunity to interact with people across all generations.”

“We’re so fortunate to have such a dedicated group of promoters who are willing to share our positive dairy stories,” added Chrisman.

State Ag. Dept. asks residents to be on lookout for Spotted Lanternfly