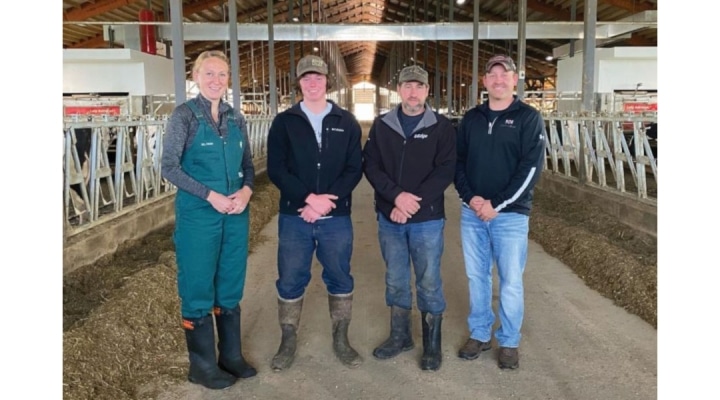 Six herds with 12-month pregnancy rates of 32 percent or higher were recently recognized with the CentralStar Cooperative ReproStar Award. One of the farms was Wepner Farms, LLC, Manawa, Wis., and pictured, from the left, are: Dr. Amanda Onan, Alex and Jeff Wepner, and Tyler Boyer. (Courtesy Photo)

“As farms have more older cows in the herd, it can create reproductive challenges, but such is not the case for this year’s award winners,” said CentralStar Coordinator of Dairy Records Consulting Julie Ainsworth. “These herds have good conception rates for third- and greater-lactation cows. Additionally, this high efficiency also means a high percent of the cows are pregnant by three cycles, and there are no open cows more than 270 days in milk.”

Established in 2019, the ReproStar Award recognizes producers for their accomplishments with reproductive efficiency. When selecting winners, a panel of judges evaluates each dairy’s data for multiple factors known to influence pregnancy rates.

“According to the 2018 Compeer Financial study, the most profitable dairies have six traits in common, one of which is high-pregnancy rates (more than 27.4 percent),” said CentralStar Director of Member Relations and Promotions Kelly Bristle. “As CentralStar is ultimately invested in the long-term success and profitability of our customers, establishing a recognition program around this key profitability factor was a natural fit.”

More details regarding the management practices this year’s ReproStar winners use to achieve high reproductive efficiency can be found at https://centralstar.info/ReproStarAward.

CentralStar Cooperative, Inc. was established May 1, 2019, as a result of the merger between NorthStar Cooperative, Inc. and East Central/Select Sires. The cooperative’s goal of enhancing producer profitability through integrated services is fulfilled by incorporating an array of products and services critical to dairy and beef farm prosperity. CentralStar’s product and service offerings include Accelerated Genetics, GenerVations, and Select Sires genetics; artificial-insemination (A.I.) service; genetic, reproduction, and dairy-records consultation; DHI services; diagnostic testing; herd-management products; research and development; and more. CentralStar’s administration and warehouse facilities are in Lansing, Mich., and Waupun, Wis., with laboratories in Grand Ledge, Mich., and Kaukauna, Wis. For more information, visit CentralStar Cooperative Inc. at www.mycentralstar.com.