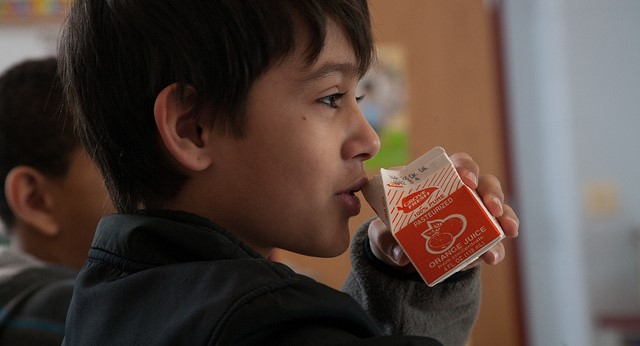 The legislation includes a pilot program to test strategies that schools can use to increase the consumption of fluid milk.  This could include ways to make milk more attractive and available to students, including improved refrigeration, packaging and merchandising. (U.S. Department of Agriculture, Flickr/Creative Commons)

WASHINGTON — The nation’s two leading dairy organizations applauded the introduction today of a bipartisan bill to help reverse the decline of milk consumption in schools.

The School Milk Nutrition Act of 2017, introduced by Representatives G.T. Thompson (R-PA) and Joe Courtney (D-CT), would allow schools to offer low-fat and fat-free milk, including flavored milk with no more than 150 calories per 8-ounce serving, to participants in the federal school lunch and breakfast programs. The bill allows individual schools and school districts to determine which milkfat varieties to offer their students.

The International Dairy Foods Association (IDFA) and the National Milk Producers Federation (NMPF) strongly support the bill and encourage Congress to pass it. Once enacted, the bill would make permanent the administrative changes in the school lunch program proposed earlier this year by the U.S. Department of Agriculture. Agriculture Secretary Sonny Perdue, in one of his first official actions earlier this year, supported giving school districts the option to offer a variety of milk types as part of the National School Lunch and School Breakfast programs.

“Congressmen Thompson and Courtney recognize the nutritional role that milk plays in helping school-aged children to grow and develop to their full potential,” said Michael Dykes, D.V.M., IDFA president and CEO. “We appreciate their steadfast commitment to reverse declining milk consumption by allowing schools to give kids access to a variety of milk options, including the flavored milks they love.”

The legislation includes a pilot program to test strategies that schools can use to increase the consumption of fluid milk.  This could include ways to make milk more attractive and available to students, including improved refrigeration, packaging and merchandising.

“Milk is the number-one source of nine essential vitamins and minerals in children’s diets, and when its consumption drops, the overall nutritional intake of America’s kids is jeopardized,” said Jim Mulhern, president and CEO of the National Milk Producers Federation.  He pointed out that in just the first two years after low-fat flavored milk was removed from the school lunch program, 1.1 million fewer school students drank milk with their lunch.

The Act also includes a provision to allow participants in the Special Supplemental Nutrition Program for Women, Infants and Children, known as WIC, to have access to reduced-fat milk for themselves and their children.

“Expanding options for WIC participants will encourage mothers to help their young children grow up strong and healthy,” said Dykes.

“When kids don’t drink milk, it’s extremely difficult for them to get sufficient amounts of three of the four major nutrients most lacking in children’s diets:  calcium, potassium, and vitamin D,” said Mulhern. “This legislation addresses that shortcoming both in schools and in the WIC program.”