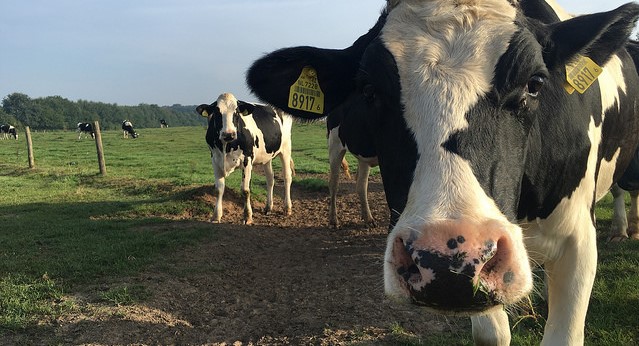 Each cow's tracker monitors how many steps the animal has taken, milk production, how many times the cow gets milked each day, her weight and how much she chews. (Ritzo ten Cate, Flickr/Creative Commons)

DETROIT (AP) — They track moo-vement and a bunch of udder data.

The dairy industry is turning to fitness trackers to monitor cows’ health and wellness as part of a growing craze to develop a data understanding of operations.

Swiss Lane Farms in the west Michigan community of Alto uses the devices on a fourth of its dairy cows.

The trackers, called T4C by Lely, are similar in appearance to the Fitbits that people wear to monitor aspects of their health, although the cows wear them around their necks, The Detroit News reported.

Each cow’s tracker monitors how many steps the animal has taken, milk production, how many times the cow gets milked each day, her weight and how much she chews. The trackers use sensor technology to record and transfer information to a software system monitored by the farm.

“We have so much information on the cows we don’t know what to do with it,” said Annie Link, a partner for her family’s Swiss Lane Farms. The farm adopted the trackers in 2011.

Swiss Lane Farms is among a growing number of farms throughout the state adopting fitness trackers for their cattle. At this point, the farm monitors 500 of its 2,000 cows. The cows produce about 20,000 gallons of milk daily.

“We’re trying to do a lot of preventative stuff for the cows,” Link said. “By the time she’s low on milk production, she’s already been low on chewing. If our cows are doing the best, we can get a high-quality milk.”

Swiss Lane Farms uses the trackers in conjunction with robotic milk machines. When the cow steps into the milking machine, it reads a transponder on the necklace.

“We’ve got people going through the data,” Link said. “Cows can get vitamin deficiency right after they have their calf. We can track that. We’ve seen good results from being able to home in on certain things.”

Swiss Lane Farms takes things a step further with the use of nutritionists that grow feed on the farm and monitor how it’s produced for the best nutritional value.

There can be a cost barrier for some farms that want to implement the technology, said Barbara Wadsworth Jones, director of the Southwest Regional Dairy Center at Tarleton State University in Stephenville, Texas.

As an example of pricing at Swiss Lane Farms, the collars have lasted about six years and cost about $160 per cow to replace. The value of a milk cow is $1,500, according to the United States Department of Agriculture.

“One of the hurdles of farms adopting technology is that they are a little costly,” Jones said. “So economically, they’re not always easy for some producers to invest in. There’s usually a setup fee for the software system, and that’s set across farms.”

The technology is an evolution of pedometers farms have used to track cow’s heat detection — or desire to mate — since the 1970s. The more the cow moves around, the more likely she is ready to breed.

“In the last eight years is when technologies have really come about and been implemented on farms in the U.S.,” Jones said.

“I research technologies a lot, and I think the limit of how we can use them we haven’t truly discovered yet. I definitely think they are the future of where the industry will be heading. I think they will enhance the management of the farm for dairy producers.”

“There’s a wide spectrum as to who has adopted what,” he said.

Erksine said fitness trackers can be a useful guide for farm workers and veterinarians.

“It can be a very helpful tool to home in on what’s going on with the cows,” he said. “It flags cows that may be sick.”

Paramount Dairy in Caro, Michigan, uses cow fitness trackers to monitor 1,800 mature cows. They’ve used the trackers since 2012 and purchased them from a company now known as SCR by Allflex, which is based in Texas.

“We started slowly,” said Brent Moyer, general manager for Paramount Dairy. “It takes some time to get used to it.”

The biggest use of the trackers at Paramount Dairy is tracking how active the cows are.

“You get a better tab on all your cows,” Moyer said. “It helps you from the standpoint of being able to identify when one doesn’t feel good sooner. It gives you the ability to make a decision faster maybe than before you had a system.”

Information from: The Detroit News, http://www.detnews.com/

— By CANDICE WILLIAMS, The Detroit News