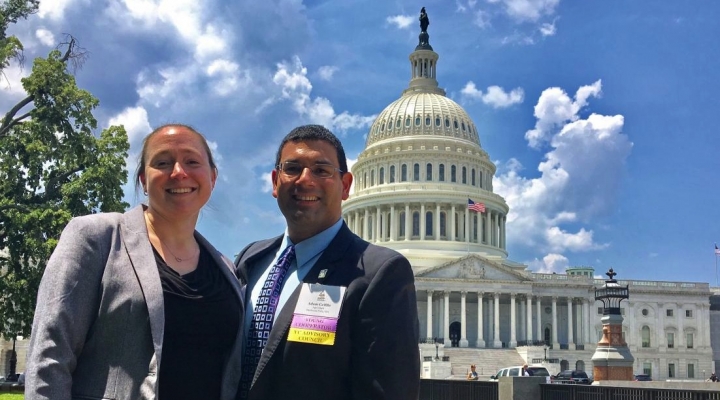 More than 70 farmers from 21 states visited their House and Senate members Tuesday, June 13, as part of their role as national leaders in the 2017 NMPF Young Cooperator (YC) program. (Courtesy Photo)

WASHINGTON — Dairy farmers from across the country visited Capitol Hill as part of the National Milk Producers Federation’s annual young farmer fly-in to Washington, where in more than 200 meetings they asked lawmakers for action on a handful of issues important to the dairy sector.

More than 70 farmers from 21 states visited their House and Senate members Tuesday as part of their role as national leaders in the 2017 NMPF Young Cooperator (YC) program. The dairy producers discussed the challenges they currently face, and highlighted four priority policy issues that need Congress’ attention:

“We are excited to share the first-person perspective of America’s dairy sector at a time when elected officials in Washington really need to hear our voice about the topics that matter most to farmers,” said Melissa Griffin, a dairy farmer from Buckland, Mass., and chairwoman of the 2017 YC Advisory Council.

Griffin’s husband Adam, who co-chairs the council, added that “we were able to make our points about issues specific to dairy, such as the need for a viable farm safety net and the importance of integrity in federal food labeling laws.  We also showed how high-profile national issues such as trade and immigration affect our family farm in New England.”

Randy Mooney, chairman of NMPF and a dairy farmer from Rogersville, Mo., said that the YC Program “provides our community with a powerful grassroots presence.  We need their engagement in Washington because there are so many issues competing for the attention of Congress.  Thanks to our younger leaders stepping forward, we have a much better opportunity to reach our legislative goals.”

The NMPF Young Cooperators will join NMPF’s Board of Directors on Wednesday for their June board meeting.