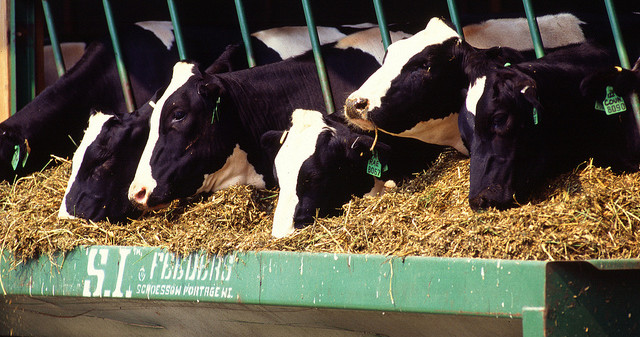 The American Farm Bureau Federation has proposed a Dairy Revenue Protection plan that would be similar to crop insurance. (USDA photo by Scott Bauer via Flickr)

MADISON, Wis. (AP) — A change to the Dairy Margin Protection Program means Wisconsin dairy farmers can choose to opt out of the federal program and turn to other risk management strategies.

The U.S. Department of Agriculture no longer requires farmers to enroll in the safety net program, Wisconsin Public Radio reported. Farmers previously had to enroll for the duration of the Farm Bill, which is passed by Congress every four years and sets federal agriculture policy.

The program pays farmers if price drops or other events impact income. But industry groups have been working to create alternatives to the program for the 2018 Farm Bill.

“It seems like there’s been a lot of money that’s been put into the federal treasury and very little of it’s actually went back to dairy farmers,” said Darin Von Ruden, president of the Wisconsin Farmers Union.

The American Farm Bureau Federation has proposed a Dairy Revenue Protection plan that would be similar to crop insurance.

“It would kind of be a hybrid of MPP and using the future market,” said Karen Gefvert from the Wisconsin Farm Bureau. “It’s something that we’re interested in and supportive of moving forward as another tool in the toolbox for farmers to utilize for risk management.”

Some industry groups believe that the margin protection program won’t be replaced.

“Whether it’s the right answer or not, MPP is probably going to be preserved and slightly improved upon or there’s going to be some attempt to try to salvage the program and make it more functional and more appealing for farmers,” said John Holevoe , the director of government affairs with the Dairy Business Milk Marketing Cooperative.