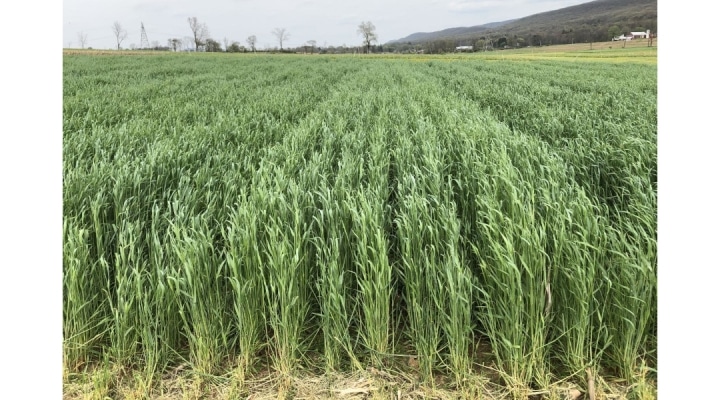 UNIVERSITY PARK, Pa. — Dairy farmers in the Northeast — facing a warming climate that exacerbates nutrient pollution but lengthens the growing season — can reduce the environmental impact of their operations and maximize revenues by double cropping and injecting manure into the soil, rather than broadcasting it.

That’s the conclusion of a team of researchers, led by Penn State agroecologists, whose new study evaluated whole-farm production and the environmental and economic impacts of adopting these practices on a representative dairy farm in central Pennsylvania under recent historical and projected mid-century climate.

The research is important, according to Heather Karsten, associate professor of crop production/ecology in the College of Agricultural Sciences, because dairy farms — especially in the Northeast — are increasingly subject to more stringent regulations to reduce nutrient losses. With expected warmer conditions that will result in increased ammonia volatilization from manure and more frequent and more severe storms that will cause more soluble phosphorus runoff, new strategies are needed to limit nitrogen and phosphorus losses from crop fields.

“We have been trying to identify how to help dairy farms be profitable and produce more of their feed and forage crops while at the same time ease the challenges of nutrient management,” she said. “Double cropping small grains such as winter wheat or winter rye and corn silages provides a strategy that can benefit dairy farms in the northeastern U.S. as they take advantage of a longer growing season. Also, subsurface application of manure may reduce nutrient losses as the region faces warmer temperatures and greater precipitation.”

Double cropping offers the added benefit of keeping soil continuously covered by vegetation, reducing nutrient runoff, erosion and sedimentation. Winter small grains are seeded after corn for silage is harvested in September, and they germinate and grow until cold temperatures make them go dormant for the winter. They begin to grow again in late March and continue to develop until they are harvested in May, just before the corn crop is planted.

The researchers found that double cropping increased and stabilized the farm’s feed production by providing forage from a winter rye crop with less dependency on the summer crops of corn silage and perennial cool-season grasses. Summer crops are susceptible to summer droughts, Karsten explained, which are expected to increase in this region due to warmer temperatures and increased evapotranspiration.

In findings recently published in Agricultural Systems, the researchers reported that double cropping and subsurface injection of manure reduced total nitrogen losses by 12%–18% and total phosphorus losses by 16%–19%. Adoption of these strategies, they noted, provided a feasible adaptation and mitigation approach for future climate by reducing projected increases in soluble phosphorus runoff and ammonia emissions caused by warmer temperatures and greater precipitation.

Significantly, these benefits can be achieved while maintaining and potentially reducing total farm-production costs, Karsten pointed out.

“There’s a lot of interest in double cropping among Northeast dairy farmers,” she said. “I think farmers are realizing they have a longer growing season, and there are more precipitation events in spring that make getting into the field to do any operation more challenging. Our results demonstrate that adoption of these strategies can help mitigate dairy farm environmental impacts now and even more in the future.”

The U.S. Department of Agriculture’s Agricultural Research Service mostly funded this study, with partial support from USDA’s National Institute of Food and Agriculture.