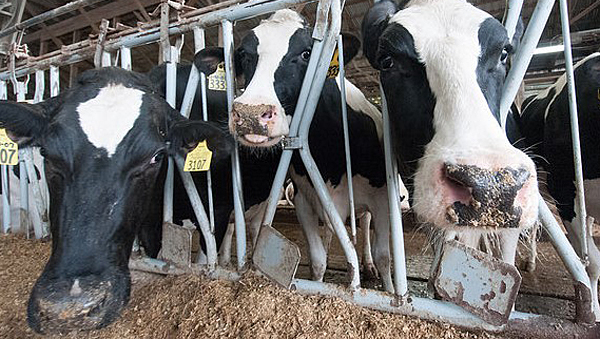 Consolidation has been a fact of life for all of agriculture for generations, and family farms indeed are getting bigger. Even so, according to the latest USDA Census of Agriculture, nearly three-quarters of U.S. dairy farms have fewer than 100 cows on them. (U.S. Department of Agriculture, Public Domain)

ARLINGTON, Va. — “Big Dairy.” One of the strangest terms attached to the industry. As seen in fear-mongering headlines, Big Dairy is used to de-personalize individual dairy farmers and imply some large, faceless force foisting an agenda on unsuspecting consumers. So, who exactly is it? Maybe by figuring out what Big Dairy is – or isn’t – some light could be shed on what’s real, and what’s contrived, in debates about dairy and its presence in the marketplace.

Perhaps Big Dairy means dairy farms themselves. Consolidation has been a fact of life for all of agriculture for generations, and family farms indeed are getting bigger. Even so, according to the latest USDA Census of Agriculture, nearly three-quarters of U.S. dairy farms have fewer than 100 cows on them. Of course, most production comes from the largest farms, but even the biggest ones – the 189 U.S. dairies with more than 5,000 cows as of 2017 – are too numerous and geographically dispersed to create a monolithic giant. And more than 95 percent of all dairy farms, regardless of size, are family-run farms. That’s far from faceless. 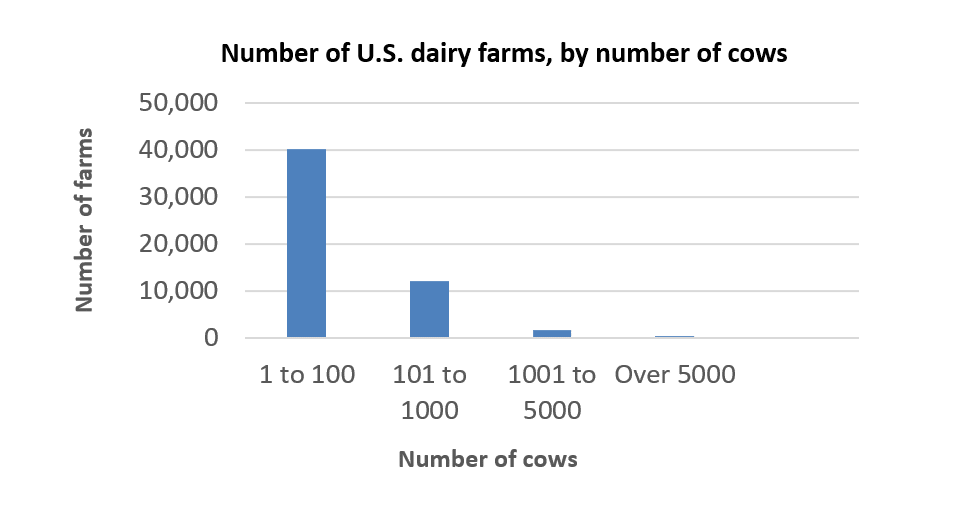 That rules out farmers. But what about dairy corporations? The dairy industry boasts some impressive-sized businesses. Land O’Lakes is ranked #212 on the Fortune 500, and Dairy Farmers of America would make the list too, if it were publicly traded. That might be Big Dairy, except – DFA and Land O’Lakes are farmer-owned cooperatives. If that’s what people mean when they talk about “Big Dairy,” then­­­ Big Dairy contains an awful lot of small and medium-sized family farms. And these cooperatives are tiny compared to, say, Big Healthcare, (four entries among Fortune’s top 10 companies) Big Oil (four of them in Fortune’s top 25), or Big Tech (six in the top 50).

But maybe it’s not about raw size. Maybe Big Dairy is a myth invented by those who want to make family dairy farmers seem “big” to advance some contrasting image of their competitors – who want to be seen as plucky, usually plant-based, upstarts taking on Big Dairy with highly touted “innovation.”

Let’s explore this. Take, for example, Perfect Day, allegedly just a humble innovator with nothing to offer but a thousand $20-a-pint tubs of imitation ice cream … and startup funding from Temasek – a venture-capital arm of the government of Singapore — and Archer-Daniels-Midland, an agri-business behemoth with $64 billion in annual sales that ranks #49 on the Fortune 500. Other plant- and cell-based alternatives are financed by Jeff Bezos (worth roughly $115 billion, the world’s richest man at the end of 2019) and Bill Gates (net worth over $100 billion) – not exactly little guys, to say the least. In fact, if you added up the gross receipts of all 40,000 dairy farmers in the United States last year (an estimated $39.9 billion), you’d only be worth about two-fifths as much as Jeff Bezos. So-called “Big Dairy” will never compete with that. 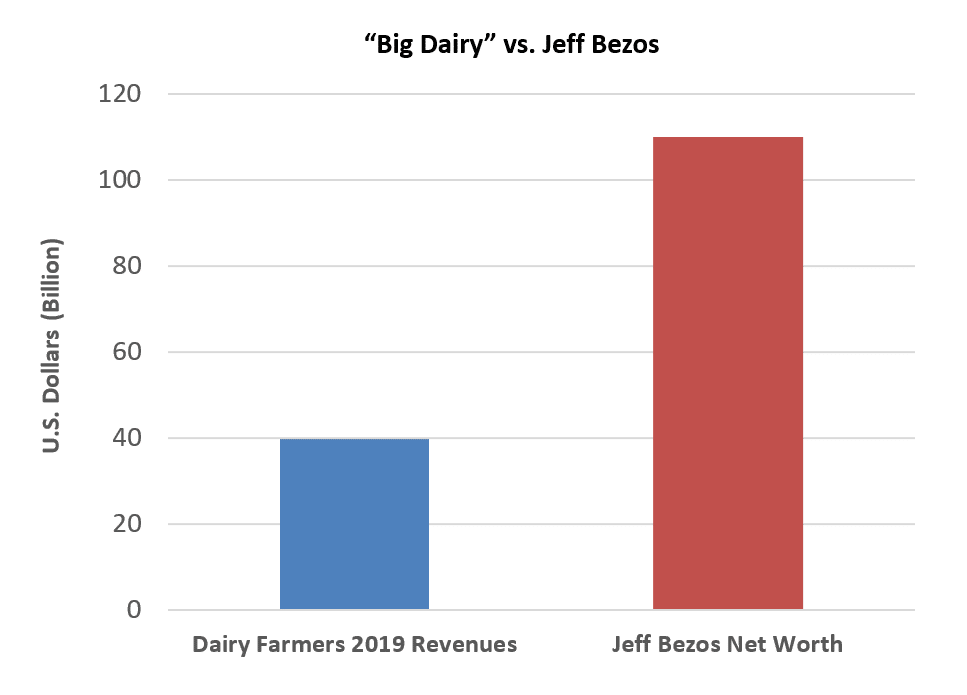 To be sure: Dairy is a significant U.S. industry. As cited on the “Got Jobs?” campaign organized by dairy groups, including NMPF, the sector as a whole is responsible for nearly 3 million U.S. jobs and has an overall economic impact of more than $620 billion, including indirect effects. Dairy directly employs nearly 1 million Americans, with an impact of more than $206 billion. In agriculture and in the U.S. economy, we aren’t David to someone else’s Goliath. Whatever success we have is because we work hard and work together.

But dairy isn’t Goliath either, and wannabe Davids shouldn’t get a pass peddling false narratives. Dairy is family farmers, cooperatives and companies, of all sizes and types, who believe deeply in the health and nutrition of their products and stand up for it against its opponents — who usually aren’t anywhere near the underdogs they pretend to be. Creating nutritious products, day in and day out, is a big task. But it’s a challenge met collectively by a diverse set of people from farm to fork, who work together to feed the U.S. and the world.

Dairy issues matter. They warrant a robust discussion. Putting the term “Big Dairy” to rest would make it a more honest one.