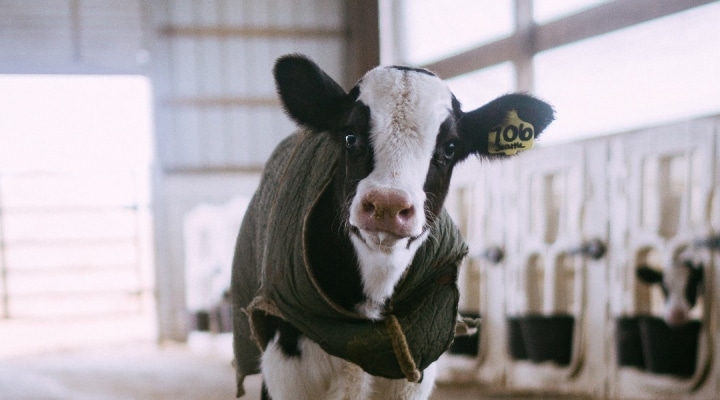 Producers typically feed milk replacer along with a grain-based starter feed to kick-start development of the rumen ahead of forage consumption. Yet the Journal of Dairy Science study is the first to specifically examine body composition changes, versus simple body weight, in response to milk replacer and high-protein starter feed. (Photo by Amber Kipp on Unsplash)

URBANA, Ill. — Dairy producers know early nutrition for young calves has far-reaching impacts, both for the long-term health and productivity of the animals and for farm profitability. With the goal of increasing not just body weight but also lean tissue gain, a new University of Illinois study finds enhanced milk replacer with high crude-protein dry starter feed is the winning combination.

“Calves fed more protein with the starter had less fat in their body weight gain, and more protein was devoted to the development of the gastrointestinal system, compared with the lower starter protein,” says James Drackley, professor in the Department of Animal Sciences at Illinois and co-author on the study. “Our results say producers who are feeding calves a more aggressive amount of milk for greater rates of gain should be feeding a higher protein starter along with that.”

Producers typically feed milk replacer along with a grain-based starter feed to kick-start development of the rumen ahead of forage consumption. Yet the Journal of Dairy Science study is the first to specifically examine body composition changes, versus simple body weight, in response to milk replacer and high-protein starter feed.

Understanding where the nutrients go in the body makes a big difference.

“If producers aren’t providing enough protein in the starter as the calves go through the weaning process, they might be limiting development of the gastrointestinal system, which is needed to provide nutrients for the rest of the body,” Drackley says.

“After weaning, the weights of the digestive system and liver were greater with the higher protein starter,” Drackley says. “It might be part of the reason why a slump in growth is often seen right around the time of weaning when calves are fed a conventional starter. The calves just don’t have the developed digestive system to be able to keep things going as they change from the milk diet to the dry feed diet.”

He adds that calves fed the higher rate of milk replacer grew more rapidly and had more lean tissue, with less fat.

“The low rate of milk replacer has been fairly standard, historically. It’s designed to provide the maintenance needs and a small rate of growth, and to encourage calves to consume the dry feed at an earlier age. But research has supported the use of higher rates, so we’re trying to shift the industry towards rates of milk feeding we think are more appropriate,” Drackley says. “Now we have good reason to point producers to high-protein starter, as well.”

Beef Checkoff: What have you done for me lately?