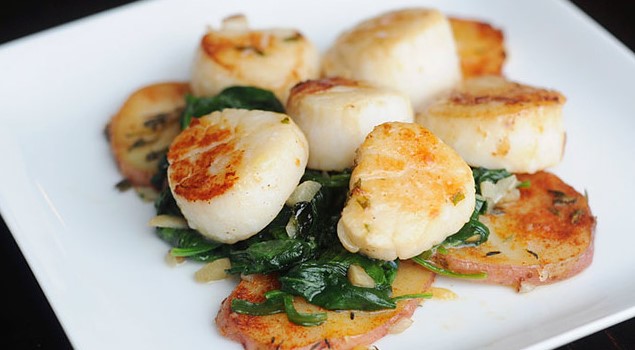 U.S. scallops were worth $532.9 million to fishermen at the docks in 2018, the third most profitable year in recorded history. (Mackenzie Kosut, Flickr/Creative Commons)

PORTLAND, Maine (AP) — The good times of heavy shellfish hauls for the American scallop fishing industry are likely to continue into next year, though prices could rise for seafood lovers.

The industry has been experiencing strong years recently thanks to high demand from consumers and heavy catches from the fleet. U.S. scallops were worth $532.9 million to fishermen at the docks in 2018, the third most profitable year in recorded history.

The New England Fishery Management Council predicted Wednesday that new rules for the 2020-21 fishing season will yield about 52 million pounds of scallops. That would be a reduction of more than 10 million pounds from the current season, but still a strong number compared to the middle part of the decade.

The shellfish typically cost $20 to $25 per pound to consumers, who have had easy access to them at stores and restaurants. Members of the industry “see the 17% reduction in supply putting upward pressure on scallop prices,” said Peter Handy, president and chief executive officer of Bristol Seafood in Portland, Maine.

The scallop fishing season runs from April 1, 2020, to March 31, 2021. The industry has been strong in recent years thanks to big hauls, a strong economy and heavy consumer demand. Times were not always so good for U.S. scallop fishermen, as the fishery fell to just over 32 million pounds as recently as 2014.

“In order to protect them so they can grow unimpeded and contribute to the fishery down the road when they are more valuable, we close areas based on the result of our annual surveys,” said Janice Plante, a spokeswoman for the council.

The majority of scallops are brought to land in Massachusetts, followed by New Jersey, Virginia and Rhode Island.

In Maine, scallop fisherman Alex Todd said he’s hopeful the predictions for a strong season are correct. Maine’s scallop fishery took a slight step back in terms of the size of the haul last year, but remains strong, he said.