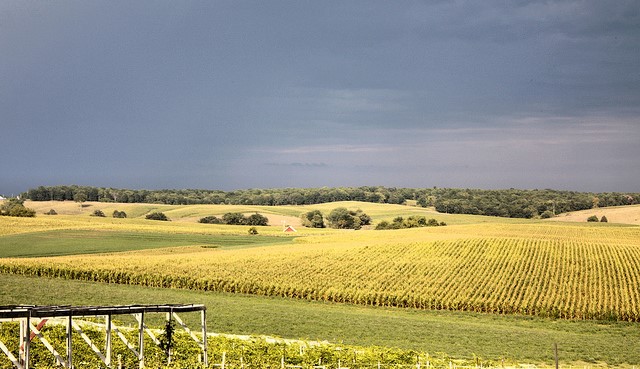 The West will stay hot and dry, the Plains will trend cooler than normal, and the East will remain rainy and humid. (Phil Roeder, Flickr/Creative Commons)

WASHINGTON — Across the US, the weather pattern that has been in place much of the week is expected to hold in place for at least the next several days. The West will stay hot and dry, the Plains will trend cooler than normal, and the East will remain rainy and humid. Centers of high pressure are anchored in both the Pacific and Atlantic Oceans which will keep the current trends stuck in place. The High Pressure system in the Atlantic has allowed a conveyor belt of moisture to stream up the coast, dropping heavy rain and causing flooding for multiple areas. Since the weekend, rains have been the heaviest in the Mid-Atlantic as well as in Pennsylvania, southern New York, and in North Carolina. Today, 7/26, only some scattered light showers are expected for the Mid-Atlantic, a welcomed break in the rain. This break in the heavy rain could extend into the weekend for parts of the East, although rain makes a return by next week. Next week, the highest rainfall totals could fall in the Southeastern US, although showers will be prevalent up and down the coast once again.

Temperatures across the Central US will remain cooler to much cooler than normal. Widespread areas are expected to see trends at least 5-10F below normal through early next week, although some warmer trends could begin to spread into the Northern Plains at the beginning of next week. While near to cooler than normal trends are forecast to remain through the week, some pockets of slightly warmer trends will start to move into the region. Accompanying these cooler trends will be fairly varied precipitation trends. Over the next 7 days, the Central and Southern Plains are forecast to trend somewhat wetter than normal while the Northern Plains trend mostly dry. Although much of the Central Plains could see above normal rainfall over the next 7 days, pockets of dryness could occur, especially for Missouri and areas of Kansas. Unfortunately, these areas could really use the rain as severe to extreme drought conditions have expanded since last week. 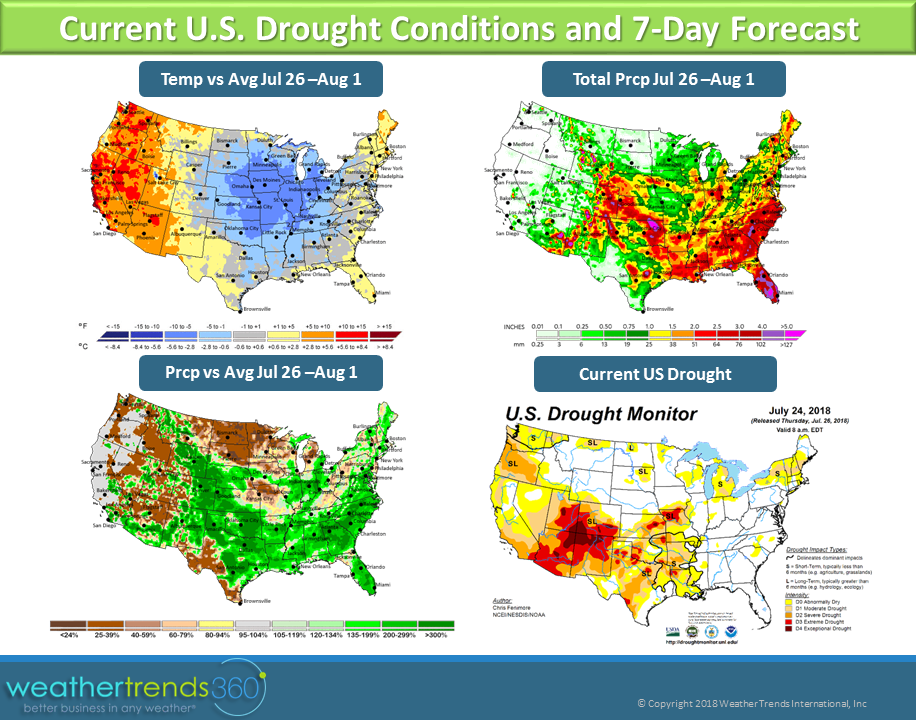 If you’re in search of hot and dry conditions, head West! While the East gets drenched and the Central US trends cool, the Western US will remain dry with temperatures well above normal. Widespread temperatures trending 5-15F above normal are expected to remain in place over the next 7 days and likely longer. Daytime highs across central California will near or exceed 100F while areas of southern California, southern Nevada, and southwestern Arizona will likely exceed 110F. Overnight lows will provide minimal relief in southern California and southwestern Arizona as temperatures will struggle to fall below the high 80s. This extended heat and dryness will likely aid in the deepening of the existing drought conditions out West. The Four Corners states currently have some of the worst drought conditions in the country, but Oregon and southern California are also experiencing large areas of severe drought. Washington, Nevada, and the remainder of California currently have a mix of no drought, abnormal dryness, and moderate drought.