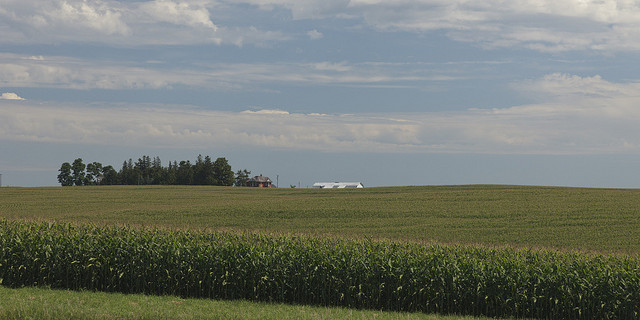 According to University of Illinois agricultural economist Todd Hubbs, an extended rally in corn prices during the next marketing year requires reduced corn supplies, increased consumption, or some combination of both factors. (United Soybean Board via Flickr)

URBANA, Ill. — December corn futures closed the week ending Oct. 27 at $3.48 per bushel continuing a pattern over the last month of small deviations within a range between $3.45 and $3.55.  Additionally, the monthly average price of corn received by U.S. producers has been less than $3.50 per bushel since August 2016 and has been below $4 for 37 consecutive months. According to University of Illinois agricultural economist Todd Hubbs, an extended rally in corn prices during the next marketing year requires reduced corn supplies, increased consumption, or some combination of both factors.

“On the consumption side, feed and residual use of corn is currently projected to increase approximately 6 percent this marketing year,” Hubbs says. “Additional increases to feed use could occur based on current livestock prices and inventories. At this point, a significant change in the USDA feed and residual use projection seems unlikely.

At 1,850 million bushels, U.S. corn exports are forecast at 443 million bushels lower than exports of a year earlier. Hubbs says the decrease primarily reflects the larger corn harvest in South America during 2017.

“Caution should be used when measuring the export potential for the current year based on the level of export sales relative to the prior year,” Hubbs says. “U.S. exports may begin slowly and build throughout the marketing year due to the South American production shortfalls or other consumption factors. However, the current pace of exports does not show any sign of exceeding the current projection by a substantial margin.”

According to Hubbs, a price rally for corn in the short run may come from the supply side. The release of the USDA’s Crop Production report on Nov. 9 will have an updated forecast of the size of the 2017 corn crop. During the previous 30 years, there were nine years when the average yield forecast increased each month from August through October. The November forecast was below the October forecast in two of those years.

“The current slow pace of harvest, especially in northern states, is generating mixed expectations about the potential change in the forecast this year,” Hubbs says. “An adjustment in the 2017 production forecast this month is not expected to be large enough to provide a substantial change to the current corn price scenario.”

“It is too early in the growing season to assess yield potential, but production below these early projections may hold potential for stronger U.S. export levels in 2018,” Hubbs says.

Hubbs says in 2018, a reduction in corn acreage in the U.S would hold the most likely scenario for increased corn prices. However, current projections for 2018 place planted acreage near or slightly above the 2017 level of 90.4 million acres. Corn prices would be expected to get a boost if acreage is reduced enough to result in smaller stocks at the end of the 2018-19 marketing year. Without a reduction in harvested acres, Hubbs says the prospect for lower ending stocks relies on low U.S. yields and a significant increase in consumption.

“The prospect of higher corn prices due to a reduction in the estimated size of the 2017 U.S. crop or stronger-than-projected demand for corn appears unlikely at this time,” Hubbs says. “Therefore, a smaller-than-expected South American crop or a much smaller U.S. crop in 2018 remain as potential sources for higher prices. In the near term, the continuation of corn price in the current range is likely with a low potential for a break out anytime soon.”