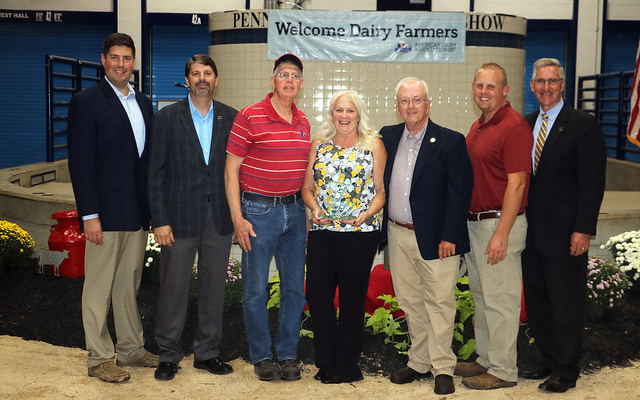 The Image Award is presented annually to an individual who has enhanced the image of the All-American Dairy Show with significant contributions to its reputation, prestige and welfare.

“Debby has been a dedicated behind-the-scenes All-American advocate for nearly two decades,” said Agriculture Secretary Russell Redding. “The success of the show has been dependent on her steady hand and willingness to pitch in wherever needed. She is the exact volunteer this award seeks to honor.”

Griffith became involved with the All-American Dairy Show 17 years ago when her daughter Nichole, a former Farm Show livestock office summer intern and employee, asked her to help. Since then she became the face of the show’s information booth each evening, helping exhibitors with requests. She also provided meals for the livestock office staff and snacks for the many volunteers, picked up and delivered show signs and materials, entered and verified show results, gathered information for the show’s 50th anniversary celebration, and helped coordinate wine and cheese events.

Most recently, Griffith has assumed the All-American bookkeeping responsibilities that include preparing financial reports for the board of directors, balancing bank statements, writing and mailing exhibitor premium checks, and even writing thank you notes on behalf of the show.

“To be considered and honored this way brings me to tears,” she said, surprised at the honor.

For more about the show, including a complete schedule, and to sign up for a daily wrap-up of events, photos and show results, visit allamerican.pa.gov.