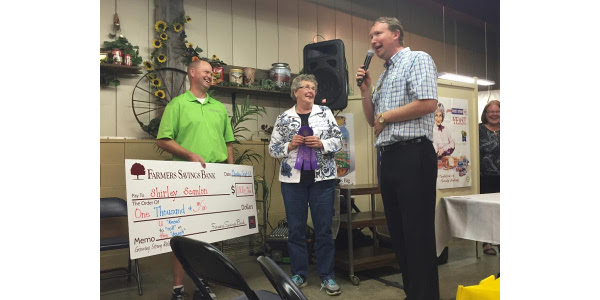 SPENCER, Iowa — “Come Home” and showcase your baking talents at this year’s Clay County Fair, Sept. 9-17. With 14 new special contests in the Oven Products department in 2017, there is certainly something for everyone.

In honor of this year’s Fair Centennial, as well as Riecke’s Bayside Gallery’s thirty-year celebration, a special prize of a large, matted Robert Duncan painting will be awarded to the exhibitor with the most entries in the department. Each exhibitor will also receive a special commemorative ribbon to help celebrate this year’s Centennial Clay County Fair.

In addition, each recipe entered this year will be a part of a Centennial cookbook available for purchase in 2018.

New special contests honoring the Centennial Celebration include KAF’s Centennial Red, White and Blue Contests where each adult will enter a Berries and Crème Tart and juniors will make Red, White and Blue Blondies. Farmer’s Trust and Savings Bank will be sponsoring a new “Heritage” Recipe Contest where individuals are encouraged to make a 100-year-old family recipe and add a short background. Finally on Sunday, September 17, there will be two contests featuring Clay County Fair’s most memorable picnic food traditions (fried chicken and potato salad) to commemorate this special year.

The $1,000 Cinnamon Roll Contest is returning once again this year, sponsored by Farmer’s Savings Bank, The Pothast Family, Edward Jones, and Asher Motor Company. This big-prize contest on Monday, September 11, contributes to the total of more than $5,400 of prize money available for the special contests.

In addition to these fun contests, there will be many others as well. IBBIA’s Biscuits and Gravy Egg Bake Contest will kick off the Fair on Sunday, September 10. Both the Beef Calzone Contest and the Pork Tenderloins Fixed Your Way Contest will be on Tuesday, September 12. On Wednesday, September 13, there will be the Awesome Appetizers That You Would Serve at an Opening Night Play/Show Party Contest. The contest implemented last year in memory of Janice Nostrom will return, this year focusing on Honey Oatmeal Yeast Bread. Mrs. Grimes Black Beans and Corn Salsa Contest will be on Friday, September, 15. Also on Friday, the contest created in memory of Bruce Piper will feature “America’s Favorite Dessert Contest” – Bruce Piper’s Apple Pie. Finally, wrapping up the week-long festivities will be the Del’s Potato Salad Contest.

For more information on these contests as well as other competitions at the Fair, please visit www.claycountyfair.com to download an exhibitor handbook.