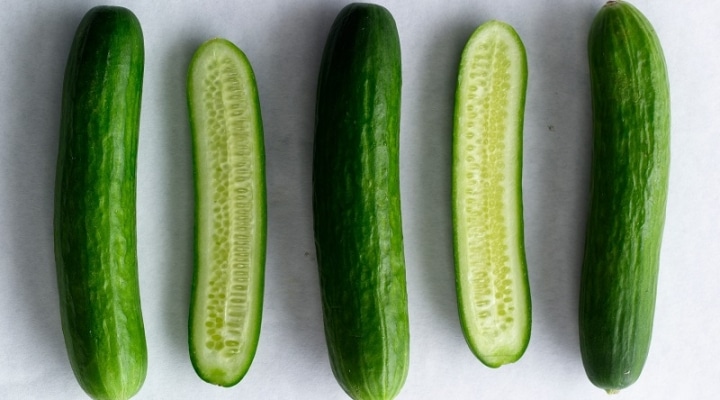 According to 210 Analytics founder Anne-Marie Roerink’s analysis of IRI MULO data, cucumber sales topped $1.2 billion in 2020 and $784 million through July 25 of this year. Sales through July 25, 2021 are up 5.6 percent year over year and up 23.1 percent for the same period from two years ago (the pre-pandemic year of 2019). The above pictured cucumbers are the popular organic Persian variety. (Courtesy Photo)

MONTEREY, Calif. — A popular vegetable year-round and a cooling treat during the summer months, organic cucumbers are a mainstay in the produce department—and recently the cucumber category has been showing strong sales performance.

“Cucumber sales have exceeded all growth projections, not just in the record 2020 year, but they continue to be a star performer in 2021,” says Anne-Marie Roerink, principal and founder of 210 Analytics.

In terms of understanding how overall cucumber data relates to organics, Roerink notes that generally “the trend lines point the same way, with organics showing an above-average growth rate in many produce categories.”

Earl’s sources its three main organic cucumber varieties primarily from Divine Flavor, though it also gets them from Wilgenburg Greenhouses in the late summer and fall. Lichtenberg’s personal favorite cucumber variety is the Watermelon Gherkin, which Earl’s buys from La Granjita Organica in Gonzales, California. “It’s extremely cute!” he says. “It looks beautiful in a salad, and it has a little bit of a spicy type of flavor that I like.”

One of the main trends that Lichtenberg has noticed with the slicer, Persian (mini), and European cucumbers over the years is the shift to protected production and vertical growing. “They’re seldom field grown anymore,” he says. “They’re almost all grown in hoop houses, greenhouses, or shade houses, and they’re poled. … And that’s because it just produces a nicer cucumber— straight green all around, no yellow bellies, and less scarring because there’s no wind.” He also notes that production has been shifting away from California to Mexico.

David Weinstein, director of procurement for Heath & Lejeune, has observed this trend as well. “The biggest change in the [organic cucumber] market has been the decline in domestic producers in favor of Mexican producers,” he says. “At this rate, there will not be any domestic producers left, except for small, seasonal producers.”

One California seasonal producer of organic cucumbers that is seeing great success is Wilgenburg Greenhouses. Located in Dinuba, California, Wilgenburg Greenhouses cultivates European, Persian (mini), and slicer cucumbers. “Over a four-year period, we have grown our cucumber sales by 100 percent,” says Peter Oszaczky, general manager of Organic Harvest Network, Wilgenburg’s exclusive sales agent. “We have seen increased demand for all our cucumbers, with Persian the greatest increase by percentage basis.”

Up north in the Seattle area, the cooperative retail chain PCC Community Markets has also seen a significant growth in sales of Persian (mini) cucumbers. (In addition to Persians, the cooperative carries slicer, European, lemon, and pickling cucumbers from a wide variety of growers.) “The popularity of mini cucumbers we attribute to a few factors,” says Joe Hardiman, senior produce merchandiser for PCC. “They have soft edible skin, a unique look, and a gentler seed bank or no seeds at all. The smaller size has also made it a popular lunch box favorite.”

One of PCC’s sources for its Persian (mini) cukes is Jacobs Farm Del Cabo, which started growing the variety about a decade ago in response to interest from its retail customers. “At the time, we understood them to be an up-and-coming specialty snack item,” says Danielle Loustalot, marketing manager for Jacobs Farm Del Cabo. “Consumers loved them as their small, narrow size makes them perfect for snacking and slicing, and their superior flavor and crisp crunch is unmatched.”

“The popularity of mini cucumbers we attribute to a few factors. …They have soft edible skin, a unique look, and a gentler seed bank or no seeds at all. The smaller size has also made it a popular lunch box favorite.” – Joe Hardiman

Persians (minis) are the only cucumber variety Del Cabo grows, and it cultivates them in shade houses in Sonora and Baja, Mexico. “We achieve high quality, flavor, and yield through very intentional soil, nutrient, and water management,” says Loustalot. “Persian cucumbers are now considered a staple item at every supermarket. Today, there is consistent demand for this superior ‘mini’ organic cucumber variety.”

Organic cucumbers are a major commodity for Portland-based Pacific Coast Trading Company, which offers year-round programs of the slicer, Persian (mini), and European varieties. While it works with one seasonal grower out of Mt. Vernon, Washington (Treehouse Produce), most of Pacific Coast Trading’s cucumbers come from organic growers in Mexico, many of which are small and medium-sized family farms.

“Over the past few years, organic production of cucumbers in California and Florida is not enough to fulfill demand,” says Scott Schultz, director of business development and vendor relations for Pacific Coast Trading. “Mexican organic production has become very important, and the whole ‘cucumber economy’ has adapted to the new reality of year-round production in Mexico. Not only are our Mexican organic cucumber growers using superior seed varieties and shade-house growing, they have post-harvest handling and food safety down to a science. We are getting superior quality from Mexico—better organic cucumbers than I have ever seen before.”

Over on the East Coast, Four Seasons Produce offers organic slicer, Persian (mini), and European cucumbers year-round and sources them from a variety of regions. The distributor gets its organic slicers from the Northeast and Southeast when in season and from Mexico during the winter. Its main US slicer grower is Lady Moon Farms, while its Mexican slicer growers include Sunfed, Wholesum, and Divine Flavor. Four Seasons’ organic Persian and European cucumbers come from growers in both Canada and Mexico, including Mucci Farms, DelFrescoPure, Topline Farms, Wholesum, and Lakeside Produce.

“Organic slicer cucumbers have been a roller coaster over the last two years,” notes James Camera, organic vegetable buyer for Four Seasons. “There were times product was virtually nonexistent during the Mexican season in late 2019, early 2020. We had to use every vendor we knew to cover our customer needs, and [we were] paying $40+ FOB. Poor weather conditions yielded low supplies, and demand drove those high prices. … With the return of foodservice and society returning to close-to-normal habits in 2021, demand [for organic slicers] has been weaker this year, creating more consumer-friendly pricing.”

PODCAST: How to cultivate the next generation of organic farmers
November 21, 2021