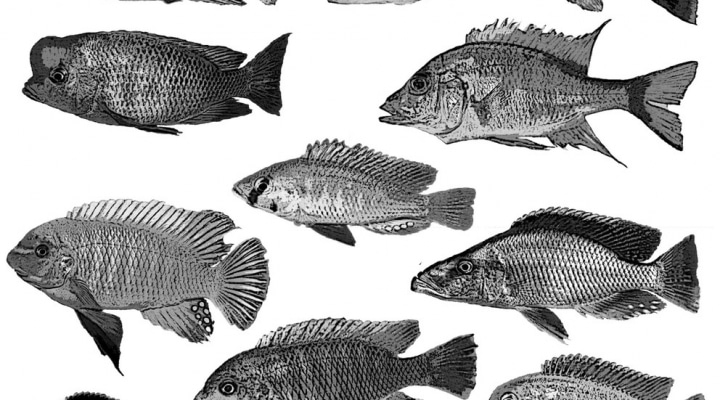 This illustration shows the variation in body morphology in cichlid fishes in Lake Malawi. The body of water in Southern Africa, home to between 800 and 1,000 species of the colorful fish often seen in aquariums in the U.S. is huge and deep, holding 7% of the world's available freshwater. However, 10% of its cichlid species are believed to be endangered by overfishing for food. IMAGE: JAY STAUFFER JR./PENN STATE

UNIVERSITY PARK, Pa. — Computed tomography — CT scanning — which combines a series of X-ray images taken from different angles around an organism and uses computer processing to create cross-sectional images of its bones, is providing new insight into an old initiative to characterize fishes in Africa’s Lake Malawi.

The process, demonstrated in a new study using the high-resolution X-ray computer system in Penn State’s Center for Quantitative X-Ray Imaging, is important because it will lead to the identification and management of more of the fish species in Africa’s second largest lake, according to lead researcher Jay Stauffer Jr., distinguished professor of ichthyology in the College of Agricultural Sciences.

“Before they can effectively manage fish populations, they have to know what is there,” he said.

Regarded by scientists as the most vibrant and diverse body of water in the world, Lake Malawi is home to between 800 and 1,000 species of colorful fish called cichlids; however, the lake is overfished by humans for food. As a result, about 10% of those species are believed to be endangered.

Located between Malawi, Tanzania and Mozambique, Lake Malawi is immense. It covers an area of more than 11,000 square miles and holds 7% of the world’s available surface freshwater — by comparison, appreciably more than Lake Erie.

“About half the species in the lake still haven’t been described,” said Stauffer, who has characterized, or discovered, more than 60 cichlid species himself. Since 1983, he has visited Lake Malawi for extended periods annually, collecting cichlid specimens while scuba diving.

After preservation, those specimens have been housed in the Penn State Fish Museum at Rock Springs, and approximately 35,000 are scheduled to be transferred to the National Research Institute of South Africa this year after COVID-19 restrictions are lifted. In the recent study, Stauffer and colleagues performed CT scans on selected specimens in the collection.

The entire head of each fish was scanned, and the researchers focused on the “morphology” — analyzing the shape and profiles of the skulls and the structure and arrangement of teeth on the pharyngeal jaws and the oral jaws. This helps to determine a species’ specialization to capitalize on certain food sources and to compete with other species.

“We chose species to scan that we knew had different feeding repertoires, and then we wanted to compare their head morphology with their species’ feeding specializations to determine the relationships between morphology and behaviors,” Stauffer said. “The purpose of this research was to show how observed behavioral traits of shallow-water species can be linked with morphological attributes using data collected from selected cichlids. Such associations can be used to predict behavior of deep-water or rare species, based on head morphology.”

In findings recently published in Ecology and Evolution, the researchers reported that high-resolution CT scanning will enable scientists to infer life history and behavioral characteristics of rare or extinct fishes from a detailed examination of morphology and linkages between morphology and behavior observed in surviving species.

Stauffer and other scientists will use CT scanning as they continue to identify cichlids in Lake Malawi. The technology is nondestructive, he explained, so they can collect data from specimens in museum collections.

“High-resolution computed tomography permits us to view the internal morphology and examine areas that would otherwise be destroyed by dissection,” he said. “It will be a great help to me because I’m going over there and spending four to six weeks a year at the Institute, identifying fishes that are in its museum.”

Many of those older museum specimens are surprising him, noted Stauffer, 70, who has no plans to retire. “I’m finding a lot of species I’ve never seen before in more than 30 years of diving in Malawi. I think they’re probably extinct. I’d like to describe these species, and the CT scans will help me to make accurate guesses about what their behavior was in the lake.”

Funding for the study was provided in part by the National Science Foundation/National Institutes of Health joint program in ecology of infectious diseases and the Pennsylvania Agricultural Experiment Station, Penn State.