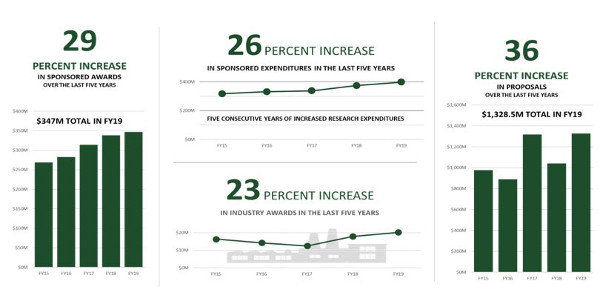 Spending on research, which has grown by nearly $100 million in the last decade, signals a bright future for the university’s research environment. In the fiscal year that ended June 30, CSU posted increases in all areas of sponsored project awards, including federal and industry funding.

“With our total expenditures closing in on $400 million this year, it’s clear that our research enterprise has never been stronger,” said Vice President for Research Alan Rudolph. “In an era of shrinking federal funding and increased competition for that funding, the fact that our federal expenditures have continued to increase speaks to the quality, breadth and depth of our faculty.”

About 70 percent of CSU’s research dollars come in the form of grants awarded by federal funding agencies. The remainder originate from other sources, including state and local governments, private foundations, nonprofits and industry partners.

CSU’s steadily growing research enterprise is fueled by faculty who compete for and are awarded grants and contracts. One such notable award earlier this year came to the Cooperative Institute for Research in the Atmosphere, which secured a $128 million funding renewal from the National Oceanic and Atmospheric Administration. CIRA, operating at CSU since 1980, is one of 16 such cooperative institutes at U.S. research universities. CIRA supports a broad spectrum of NOAA research, including forecast model improvements, hurricane track and intensity forecasting, real-time satellite tools for the National Weather Service, and forecaster training on use of satellite observations.

Of note this year was the signing of an agreement with Zoetis, a premier animal health company, to establish a research lab at CSU for exploring livestock immune systems.

“Our impressive growth in industry sponsorship and collaboration is sure to accelerate further, as a result of this landmark agreement with Zoetis,” Rudolph said. “This historic R&D incubator lab will pave the way for new alternatives to antibiotics in food-producing animals and innovations to improve animal health.”

“Our impressive growth in industry sponsorship and collaboration is sure to accelerate further, as a result of this landmark agreement with Zoetis.”

The university also recently announced a partnership with the Coalition for Epidemic Preparedness Innovations (CEPI) for developing a vaccine candidate against Rift Valley Fever. The coalition will provide up to $9.5 million for manufacturing and preclinical studies, in collaboration with CSU faculty. This will be the first time CSU researchers are involved in both the production of a vaccine and the sponsor of its use in humans.

In fiscal year 2019, CSU researchers requested a total of $1.3 billion in funding from various sources, representing a 27.7% increase over the previous year. Proposal submissions are one of many metrics university officials use to gauge the health of the research climate.

This research climate is also closely tied to the work of CSU Ventures, the university’s technology and intellectual property licensing office. CSU Ventures brings technologies and ideas, the majority of which originate in CSU research laboratories, to industry and the marketplace.

In fiscal year 2019, CSU Ventures supported a record 261 inventors, who disclosed a record 127 new inventions. Licenses to CSU intellectual property also reached an all-time high, with 52 licenses signed in 2019. Licensing income for the university totaled $3.8 million, including the sale of the Rapid InterLibrary Loan (RapidILL) service to ExLibris. The RapidILL service was developed by CSU Libraries staff and provides efficient peer-to-peer sharing and document delivery for libraries worldwide.

The university also saw the establishment of six startup companies and the issuance of 47 patents.

The six new startup companies, and their faculty leads, are:

‘Living with fire is not easy’