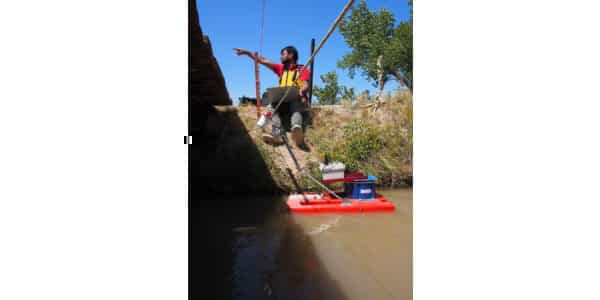 FORT COLLINS, Colo. — Irrigation is critically important for feeding the world, but it’s not very efficient. About 70% of global freshwater usage goes to irrigation. That percentage is even higher in the western U.S.

Irrigated water is largely conveyed to fields by earthen canals, which are inherently leaky. It is difficult to gauge how much irrigation water seeps into the ground, but estimates from around the world range from 15 to 70%.

In a recent study, Colorado State University researchers proved the polymer known as LAPAM is effective as a temporary, economical sealant for reducing irrigation water loss. This research could not only reduce water loss, it could prevent water and soil degradation.

For more than 25 years, Tim Gates, a professor of civil and environmental engineering, has studied seepage loss from earthen canals and what happens to the water that loses its way. His recent collaborative study represents the strongest and most extensive evidence to date that applying linear anionic polyacrylamide, LAPAM for short, as a sealant for earthen canals results in significant reduction of seepage.

“The vast majority of water distribution systems for irrigated agriculture are accomplished through earthen open channels – probably 95%, so it’s a problem that spans the globe,” Gates said.

Gates and his colleagues at CSU and in Pakistan tested two canals in Colorado and one in Pakistan, locations with different conditions and challenges. Seepage rates declined 69 to 100% when the canals were sealed with LAPAM.

Unlike other types of liners that are expensive and permanent, such as concrete, LAPAM is economical and only lasts for the water season in which it is applied. This can be strategically valuable for water managers, who may want to store water by recharging nature’s subsurface reservoirs during wetter years. Most growers don’t have the resources for more expensive liners, making LAPAM a viable option.

LAPAM plugs the leaks in earthen canals by settling out clay particles in the water and creating a thin but effective polymer-clay barrier.

LAPAM is used in various applications all over the world. While it has less of an environmental impact than plastic or concrete liners, it is synthetic and could have potential adverse environmental side effects if used in excess.

Now that the researchers have proven LAPAM works, they are turning their attention to finding a biopolymer alternative that isn’t derived from petroleum. Testing is underway in Assistant Professor Joe Scalia’s lab, and the early results are promising.

“Water is clearly very important, but to the extent possible, we don’t want to be adding other synthetic chemicals into the environment just to fix one problem,” Scalia said.

Once Gates, Scalia and their team identify an effective biopolymer or biopolymer-LAPAM blend, they will develop guidance for water managers on how to use it.

The team includes several CSU graduate and undergraduate students; among them, Ph.D. candidate Rehman Lund, who conducted the LAPAM field studies in Pakistan for his master’s research at the Mehran University of Engineering and Technology, under the direction of Professor Munir Babar.

The team, led by Scalia, is working with the Larimer and Weld Irrigation Company to quantify how much local water is lost to seepage. Later this summer and next summer, they will apply their frontrunner biopolymer or biopolymer blend to the company’s canals for field testing.

Gates emphasized the importance of irrigation company partnerships in studying seepage reduction methods. Lab testing is helpful but not enough to prove a solution is viable.

“You’ve got to show that it works in the field where things are markedly more complex and the challenges are greater,” Gates said. “The fact that we’ve got irrigation companies and departments cooperating with us to demonstrate the validity of this methodology is really an important component to this research.”

Where does the water go?

As irrigation water seeps into the ground, it mobilizes naturally occurring salts and potentially toxic trace elements that are then transported to rivers and streams, along with any pesticides and fertilizers the irrigation water may have picked up. This chemically altered water decreases water quality downstream.

Seepage into groundwater also raises the water table, making the groundwater accessible for evaporation and transpiration by plants. As this water is lost from the system, the salt it contained is left behind, increasing the salinity of the remaining groundwater and soil.

With annual repetition of this process, there’s less water to work with and its quality is lower. As demands on freshwater increase with increasing population, we can’t afford to deplete the water we have.

“We’ve got this massive worldwide problem that creates both quantity and quality challenges in water management. These sealants have been shown statistically to work on numerous canals, and they’re economically within reach,” Gates said. “Now we need to refine our understanding so that we can come up with practical guidelines that will be useful to water managers and irrigators around the world.”