Home / Ohio / CSU Extension expands aquaponics systems
A new user experience is coming! We'll be asking you to login to your Morning Ag Clips account March 1st to access these new features.
We can't wait to share them with you! Read more here. 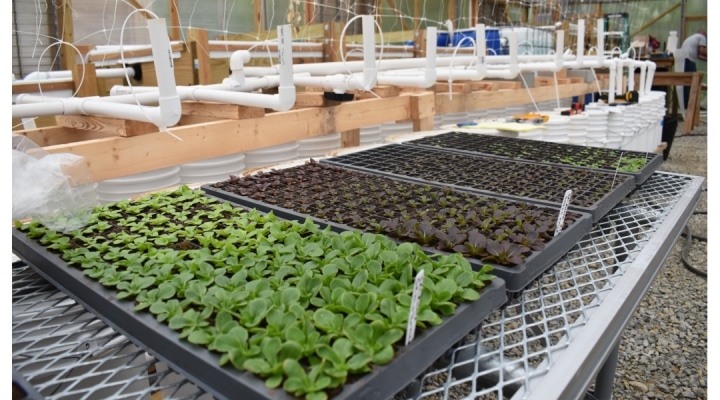 “Our first year with creating the aquaponics system involved a little bit of trouble-shooting as we learned what systems worked best within a greenhouse operation,” says CSUE Agriculture/Natural Resources Educator Marc Amante. “This year, we will be adding several new systems based on what we learned.”

“Aquaponics is a closed loop system that combines conventional aquaculture (the raising of aquatic animals such as snails, fish, crayfish or prawns in tanks) with hydroponics (cultivating plants in water) in a mutually symbiotic environment. The aquaponics system utilizes the waste of one element for the benefit of another other. In this case, the waste produced by the fish benefits the growing plants,” says CSUE Program Leader for Agricultural and Natural Resources Dr. Cindy Folck.

Currently, 450 tilapia fingerling are being raised that will be harvested in about six months.  A variety of lettuces and herbs are also being grown within the system.

An additional aquaponics system has been added this year that utilizes round, plastic tanks that are one-foot deep rather than the two-foot, wooden, square tanks used exclusively in 2020, Amante adds.

There are several advantages, he adds.

“The reduced depth saves water,” he says, “and research has shown that fish prefer to swim in circles. The system also offers increased growing space, which affects profitability by allowing more produce to be grown. The system uses a cone-bottom filter tank that is easier to clean when compared to the earlier flat-bottom filter tank.”

Brian Kampman, CSUE Vegetable and Small Fruit Technician, will be managing the aquaponics facility this year and hopes to expand the growing months of the operation.

“In the cooler months, we may be able to incorporate fish and product which prefer cooler temperatures,” he says.

A backyard aquaponics operation will also be created this year, Amante adds, that is known as the ‘chop and flip’ system that utilizes a IBC tote, which creates a smaller system that could be used in a basement or small, outdoor area to help growers experience a scaled-down system.

“Central State has two aquaponics systems, one for research and one for community engagement and workshops,” says Dr. Krishna Kumar Nedunuri, CSUE researcher for aquaponics, professor of Environmental Engineering, and director of the International Center for Water Resources Management at CSU.

The aquaponics research project is a joint effort between Central State University (lead) and The Ohio State University through funding from a United States Department of Agriculture (USDA/) National Institute of Food and Agriculture (NIFA) Capacity Building Grant. The project is a collaboration between CSU research and CSU extension, as well as OSU extension at Piketon.

For more information about the extension or research aquaponics program, contact Dr. Folck at afolck@CentralState.edu.