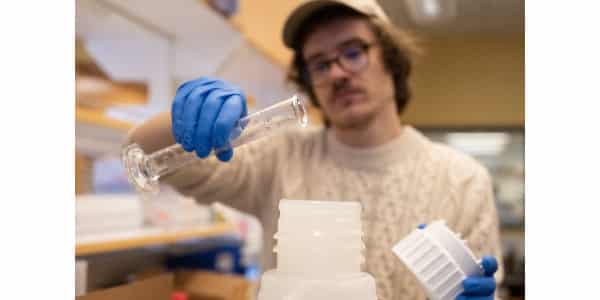 FORT COLLINS, Colo. — Colorado State University’s James L. Voss Veterinary Teaching Hospital was facing a serious challenge in early March. The hospital was down to its last few bottles of hand sanitizer, a critical yet hard-to-come-by resource in the fight against the COVID-19 pandemic.

When CSU leadership heard the news, they quickly rose to meet the challenge, tapping into talents and resources from across campus.

Shortly after the hospital’s request, the first 40-liter bottle was produced in a lab at the Infectious Disease Research Center on the Foothills Campus and deployed on March 20 to help fill the hospital’s 200-plus hand sanitizer stations. It was made by members of the Mycobacteria Research Laboratories, a center dedicated to research of tuberculosis and other infectious diseases.

“It’s been a big relief,” said Chad Alexander, facility manager at the hospital. “We were able to refill every station in the hospital, which is huge. People are using more now. It has been a big help.”

Amidst the long hours and collaboration by numerous individuals across University offices — such as the Office of the President, the Office of the Vice President for Research, University Operations, the Translational Medicine Institute and many others — the initiative displayed values of CSU’s land-grant mission of teaching, research, service and extension.

“It’s been such a team effort,” said Karen Dobos, professor in the Mycobacteria Research Laboratories, who was one of the many individuals who played a key role in the project. “It’s overwhelming to see the collaboration. There’s been a flood of amazing people willing to contribute to a solution.”

According to Dobos, who also is director of CSU’s Research Integrity and Compliance Review Office, the hand sanitizer is created according to the World Health Organization guidelines, which involves three key ingredients: ethanol, glycerol and hydrogen peroxide.

While easy to create, Dobos said the hand sanitizer demand surpassed the production capacity on the Foothills Campus. To help meet the needs of the campus community, two local businesses — Gilded Goat Brewing Co. and CopperMuse Distillery — recently stepped up to assist with production.

CSU alumnus Charlie Hoxmeier, a former Centers for Disease Control researcher who now serves as the head brewer at Gilded Goat, was quick to help when he received a call from Dobos on March 23.

Hoxmeier, who studied under Dobos while earning his Ph.D. in medical microbiology and bacteriology, had the connections and resources to help produce hand sanitizer in larger batches. He reached out to another alumnus, Jason Hevelone, owner of CopperMuse Distillery, to take the lead on the ethanol production.

“This infectious disease challenge is what I spent 10 years training for as a research scientist,” said Hoxmeier, whose business is helping with the blending, testing and distribution of the hand sanitizer. “Now as a brewer, I get to take a different approach to help CSU and the community in ways that I thought were long gone once I left my previous career behind me.”

Thanks to Hoxmeier and Hevelone’s help, Dobos said the production rate has increased by 275%, going from 40 liters every 30 minutes to 150 liters in the same period of time.

Hevelone, an engineering graduate who opened CopperMuse with fellow CSU graduate and wife Heather Trantham, said that the initiative has allowed his business to make a local impact on a global issue.

“CSU has been very important for both my wife and me,” Hevelone said. “Partnering with CSU and Charlie feels like the most effective way to help and get the hand sanitizer out there.”

Getting the hand sanitizer

Dobos said the partnership with Gilded Goat and CopperMuse has allowed her lab to focus on the production of other essential items such as disinfecting wipes and sprays for the campus community.

Dobos encouraged campus community members still on campus interested in getting hand sanitizer and disinfecting wipes and sprays to go through their building proctors to help streamline the distribution process.

Overall, Dobos said the reception to the hand sanitizer production has been overwhelmingly wonderful. She said the initiative wouldn’t have been possible without the help of researchers as well as leadership in Procurement Services, Central Receiving, Environmental Health Services and many other departments.

“It’s quite humbling because a number of us have years and years of training as microbiochemists and molecular biologists,” Dobos said, “and to realize that something this simple can have such a significant impact has helped a lot of us continue to have a meaningful purpose. I think that’s all that scientists ever want to do.”

Expect an abundance of miller moths this year
May 25, 2020

Follow these home safety tips to keep children from harm during pandemic
May 26, 2020