Home / Nebraska / Crops team success at Utah
A new user experience is coming! We'll be asking you to login to your Morning Ag Clips account March 1st to access these new features.
We can't wait to share them with you! Read more here. 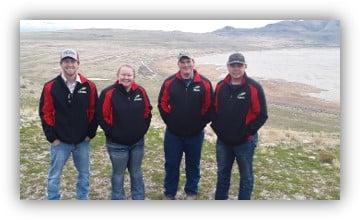 CURTIS, Neb. — A recent trip from southwestern Nebraska to Utah and back confirmed for NCTA students that their college program in agronomy is a solid investment.

Four sophomores studying at the Nebraska College of Technical Agriculture in Curtis traveled to Salt Lake City with their professor, Dr. Brad Ramsdale, for the American Society of Agronomy annual meeting.

The NCTA Team was fourth place. As the only two-year college, the Aggies scored higher than most of the four-year universities.

“Our students were excited, and rightfully so, to have beaten so many of the four-year schools,” said Professor Ramsdale.

“I was shocked to hear my name when it was announced,” Bryant said of the awards banquet.

Then, as he was in photos with ASA leadership, he again heard NCTA being called. The team had won fourth.

“That was pretty neat to win over top teams like Texas A&M and Texas Tech,” Bryant said. “We showed a two-year college can be a contender, nationally, with the bigger universities.”

The ASA trip which included an all-day tour to Utah State in Logan, educational seminars, student poster presentations, and interactions with industry leaders and companies, was a great experience for the Aggies, said Allison Wilkens a double major in agronomy and agribusiness.

“A highlight of the trip for me was being able to compete against 4-year schools and end up 4th as a team,” said Wilkens. “I also loved the sightseeing that we did around the city.”

Sitzman said, “I had a lot of fun meeting new friends from other parts of the country and being able to gain more knowledge about studies that people have been gathering data on.”

The judging contest was conducted by the Students of Agronomy, Soils and Environmental Sciences, the undergraduate component of ASA. Ramsdale started planning for the trip over the summer.

The three-part contest included plant/seed identification, lab practical, and agronomy problem solving. It was a smaller contest with 150 questions.

Larger crops contests, as nationals conducted by the North American Colleges and Teachers of Agriculture, have more categories and up to 600 questions.

Bryant said the Aggies prepare during class and lab sessions on campus. The team travels with a large binder as a study guide. A pre-contest briefing and receiving a list of 100 plant or seed names helped with preparation.

If one is unknown, particularly due to differences in climate and cropping systems, the team members have time research the internet and their binder. Internet searches are helpful for the visual aid, particularly on various growth stages of a plant, for example, Bryant noted.

“We study math equations, too, as that is an area where we might struggle,” Bryant said. One example is determining agronomical affordability for a crop based on the costs of inputs such as fertilizer.

Although the teammates can prep and study together, the contest is individual work. Their cumulative scores determine team placing.

Careers for the Aggies varies from production ag in family operations to pursuit of a 4-year degree.

Bryant, who also is competitive on the Aggie Shotgun Team and graduates next May, intends to go on for a bachelor’s degree in agronomy while continuing as a student athlete in shotgun sports.

Marburger graduates in May in diversified agriculture. He plans to return to Iowa, farming with his uncle on the family row crop operation.

Sitzman will continue in agronomy for a bachelor’s degree. Career plans are employment as an agronomist and seed dealer.

Wilkens will graduate in May 2023 with a double major in agronomy and agribusiness management. She intends to join her family business in crop production and assist her father, Mike (an NCTA alumnus) with his agribusiness.

“For any student who farms, I would strongly consider joining the crops judging team to not only help your future with being in the fields, but to meet new people who have the same interests,” Wilkens says.

NCTA Aggies Crops Teams have won three national NACTA titles since Ramsdale started the NCTA program in 2010. He will serve as coordinator for the 2022 national NACTA events to be held in Nebraska.

NCTA is the host school with all events, lodging and banquets held at multiple facilities in North Platte. A contest was not held in 2021 due to the coronavirus pandemic. Estimated attendance for the March 30-April 2 event is 600 to 800 students and educators.