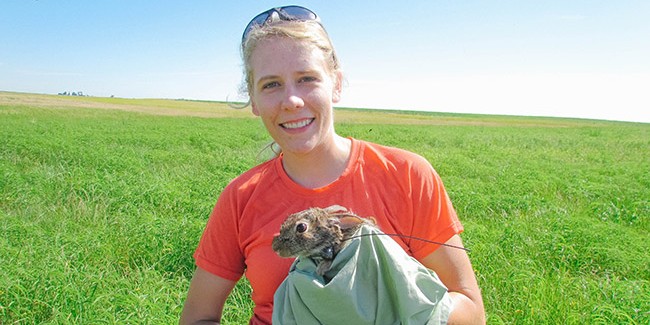 In the past, cottontails relied on crop cover to protect them from their main predators – raptors. But, since the 1970s, coyotes have been increasing in the Midwest, and crop cover doesn’t help cottontails when coyotes are in pursuit. Study author Julia Nawrocki holds a cottontail rabbit. (University of Illinois)

URBANA, Ill. — Although many Illinois farmers convert cropland into grassland specifically to benefit wildlife, the memo may not be getting through to eastern cottontail rabbits. A recent University of Illinois study suggests cottontails are spending too much time in crop fields, underestimating the dangers that await them there.

Cottontails are a valued game species that have declined in Illinois. These rabbits live life on the edge, alternating between grasslands and adjacent crop fields to feed and take cover from predators. In the past, it seems, cottontails relied on crop cover to protect them from their main predators – raptors. But, since the 1970s, coyotes have been increasing in the Midwest, and crop cover doesn’t help cottontails when coyotes are in pursuit. Unfortunately, the rabbits’ behavioral patterns haven’t kept pace with the change in predator pressure.

The finding is published in a Biodiversity and Conservation article from Julia Nawrocki, Robert Schooley, and Michael Ward, all from the Department of Natural Resources and Environmental Sciences (NRES) in the College of Agricultural, Consumer and Environmental Sciences at U of I. The team radio-collared cottontails in three central Illinois restored grassland sites, tracking where the animals spent time, and how they died, over the course of two years.

“We were expecting that their use of agricultural fields would only be risky after harvest, and we didn’t see that. It was always risky for cottontails to leave the grassland, whether crops were present or absent,” says Schooley, an associate professor in NRES.

After harvest, when crop fields were suddenly barren, cottontails did stick closer to the grasslands. But when crops were growing, the rabbits apparently felt as safe in the corn or soybean fields as they did in the grasslands. The research team tested this by offering cottontails trays of food at increasing distances from the grassland-cropland boundary. The idea was that the longer they stayed to eat at each tray, the more comfortable they were in a given location.

“Surprisingly, we found that cottontails seem to perceive the agricultural fields to be safer than the grasslands,” Schooley says. “But they’re not.” According to tracking data, rabbits died at a higher rate in crop fields than in grasslands.

Based on inspections of rabbit remains in the field, mammals – not birds – were responsible most of the time. While no mammals were caught in the act, the researchers strongly suspect coyotes. In addition to clues left at the scene, camera traps documented coyotes in the study sites, and showed that they were active at the same time as cottontails throughout the day.

“In the past, cottontails may have been making appropriate habitat choices based on the main predators at the time: hawks and owls. The crop canopy made it difficult for the rabbits to be seen from above. Now with coyotes as the new main predator, it is no longer ideal to use the crop as a refuge,” Schooley says.

According to Schooley, the situation is an example of an ecological trap: when an animal does not avoid habitat that reduces its survival or reproductive success. This is the first study to show an ecological trap resulting from the landscape context of a restored site.

“A grassland habitat might be adequate to meet cottontails’ basic needs, but because they’re typically small parcels, the rabbits are going to try to supplement with what’s around them,” he says.

Although the results could be perceived as the failure of restored grasslands to protect cottontails, Schooley cautions that the rabbits – and other wildlife – might be much worse off if grasslands weren’t part of the agricultural landscape. He says he’d like to see larger and better-connected grassland parcels, usually part of the USDA’s Conservation Reserve Program (CRP) or State Acres for Wildlife Enhancement (SAFE) initiative, which might entice rabbits to stay out of crop fields.

The article, “When good animals love restored habitat in bad neighborhoods: ecological traps for eastern cottontails in agricultural landscapes,” is published in Biodiversity and Conservation [DOI: 10.1007/s10531-019-01704-z]. Funding was provided by the U.S. Fish and Wildlife Service through the Illinois Department of Natural Resources.