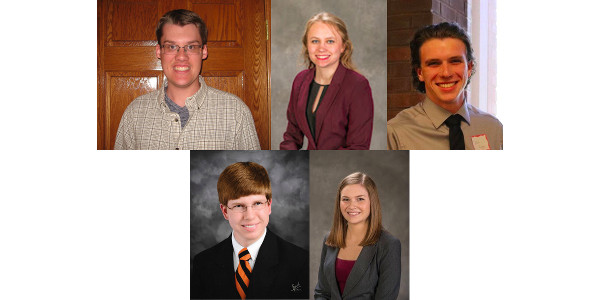 Two recipients are enrolled at Illinois State University, two at Southern Illinois University Carbondale and one is enrolled at the University of Illinois. All of the students are pursuing agricultural coursework, with concentrations in such areas as plant breeding, biotechnology, plant pathology, weed and crop management.

“Illinois soybean farmers see the scholarship program as an investment in our future,” says John Longley, soybean farmer from Aledo, Ill., and ISA Production and Outreach Committee chair.  “To feed the growing world population on the same number of acres in a continued sustainable manner, we have to educate future researchers so they can help improve soybean production.”

Michael Bernard, Mazon, Ill.  Bernard is majoring in agronomy management at Illinois State University.  He would like to help find ways to increase

“In the near future, I want to start research plots on my family farm.  In my career, I want to explore ways to reach the 100 bushel-an-acre mark by exploring the different fertilizer options and seeding rates available.  I know how important our work is for farmers who will help secure a safe source of food for the world population,” he says.

Sarah Dintelman, Belleville, Ill.  Dintelman is attending Southern Illinois University Carbondale, and is majoring in crop and soil science with a chemistry minor. Whether she decides to stick with soils or choose crops, she plans to pursue a master’s degree.

“Once I have my master’s, I will enter the workforce.  I would love to enter a position that would allow for countless resources involving crop and soil research,” she says.

“Using this I will find a career working in agronomy research, developing and improving traits that will increase productivity and nutrition of crops grown all over the United States. I want to contribute to research to crops that can be grown in developing countries, so I can do my part in helping to address and eliminate malnutrition and associated health issues in countries plagued with poverty and hunger.”

Matthew Runyon, Noble, Ill.  Runyon attends the University of Illinois and is studying crop sciences with a minor in plant biotechnology and molecular biology.  He plans to complete a master’s degree in plant breeding.

“Coming from a corn and soybean production background, my roots are planted firmly in the American agricultural tradition.  The key to future American agricultural success has its foundations in innovation. While I have not yet decided on what crop species to focus most extensively, I see great potential for yield improvement, pest resistance and environmental tolerance spectrum-wide,” he says.

Kelsey Smith, Pinckneyville, Ill.  Smith is majoring in agronomy at Southern Illinois University Carbondale.  She intends to work in research and development to face issues that include nitrogen management, increasing urban sprawl and food insecurity.

“The world needs good researchers who are intelligent enough to solve difficult issues, while also being transparent enough that consumers will trust in their good judgment,” she says.  “A specific interest of mine is creating genetically modified crops that can withstand conditions in developing countries. I am also interested in the diseases they deal with, and how we can sustainably combat them.”

The IAA Foundation administers the scholarship program for ISA. Awardees are encouraged to find on-campus employment in soybean research and attend graduate school. Scholarships were awarded based on exceptional academic ability, leadership and financial need.