LOUISVILLE, Ky. — Kentucky experienced below normal temperatures and much below normal rainfall over the past week.
Precipitation for the week totaled 0.08 inches, 0.87 inches below normal. Temperatures averaged 75 degrees for the week,
2 degrees below normal. Topsoil moisture was rated 1 percent very short, 24 percent short, 68 percent adequate, and 7
percent surplus. Subsoil moisture was rated 21 percent short, 73 percent adequate, and 6 percent surplus. Days suitable for
fieldwork averaged 6.0 out of a possible seven.

Primary activities for this week included spraying, cutting hay, and topping tobacco. Weather was mostly dry across the state
this past week allowing farmers to work in the fields and monitor crops. Fungicide is being sprayed as impending humidity will
open the door for disease. Eighty-three percent of the corn crop is in the silking stage while 52 percent of the crop is milking.
Twenty-four percent of corn is doughing with just 5 percent of the crop in the denting stage. Sixty-four percent of soybeans are
blooming while 41 percent are setting pods. With 45 percent of the tobacco crop blooming, topping is moving forward steadily.
The condition of corn, soybeans, and tobacco all remain good at this juncture, but would benefit from timely rain as temperatures rise.

Farmers had a very good week for hay making with plenty of days to move ahead with cutting. Pastures have deteriorated
slightly and will need some rain with hot weather ahead. With that said, pasture condition remains good overall. 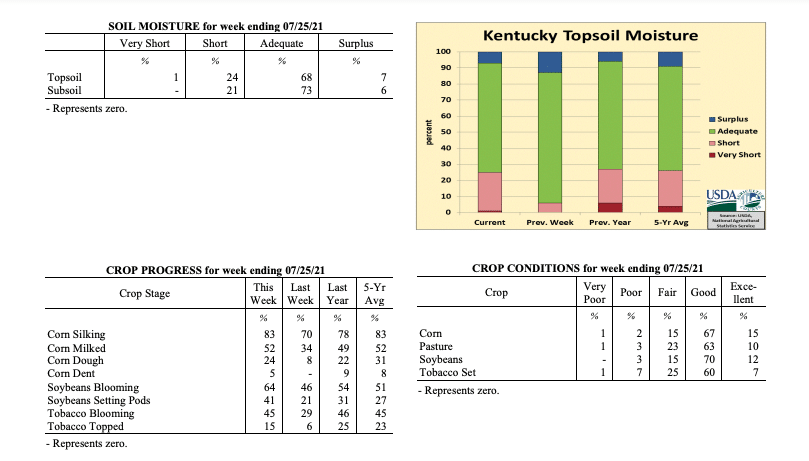