Primary activities for this week included planting soybeans, setting tobacco, spraying, and cutting hay. Scattered rain stymied work in the fields this past week. Rainfall was heavy at times and led to flooding in parts of the state. Even with the weather being unstable, farmers were able to push ahead in the fields. With the majority of the corn crop in the ground, condition remains good. Conditions vary significantly based on the area however. The average height of corn is 18 inches with 94 percent of the crop emerged. Soybean planting remains ahead of where it is historically at this juncture with 64 percent of the crop emerged. It is of note that slug damage has been observed in soybeans and some acres are being replanted. Like corn, the soybean crop is in mostly good condition. Tobacco condition is mostly good with 79 percent of the crop set. The average height of tobacco is 7 inches.

Wheat condition remains mostly good with 70 percent of the crop in the coloring stage and 40 percent of the crop mature. Recent weather patterns have slowed the maturation of the wheat crop. Lodging has been reported and may adversely affect yields. Pasture condition is good, but could be subject to damage from livestock traffic as the soil remains wet. Farmers continue to cut hay when weather permits. 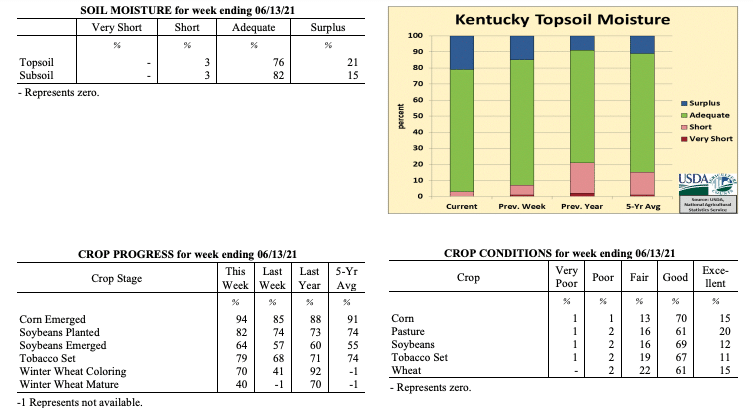