Primary activities for this week included planting corn and soybeans, setting tobacco, and cutting hay. The week started with continued dry weather and high temperatures. This pattern gave way in the middle of the week as rain moved in. The weekend brought some unseasonably cold weather. Farmers forged ahead with planting and made strong progress thanks to conducive weather through most of the week. As corn planting nears completion, emergence is at 77 percent. The corn crop is rated mostly good at this time, however the presence of insects has been noted. The average height of corn is 7 inches. Soybean planting remains ahead of where it is historically at this juncture with 45 percent of the crop emerged. Like corn, the soybean crop is in mostly good condition. Tobacco setting is nearing the halfway point as strong progress was evident over the past week. It is of note that some crops were replanted due to previous flooding.

Wheat condition remains mostly good with 95 percent of the crop headed. The recent cold snap did threaten wheat, however widespread damage is not expected. Pasture condition is good and growth will pick up as temperatures normalize. The recent rain will help to promote strong pasture growth as well. As farmers continue to cut hay, the crop is in overall good condition. Hay supply is mostly adequate and should remain in good shape as pasture growth ramps up. Many fall calves have been marketed thus reducing the feed requirement. 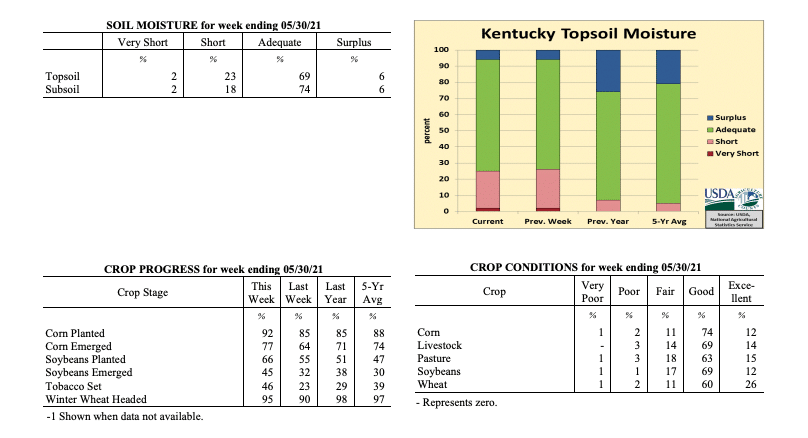