Primary activities for this week included planting corn and soybeans along with spraying. (United Soybean Board via Flickr)

Primary activities for this week included planting corn and soybeans along with spraying. Persistent precipitation halted fieldwork throughout the week. Farmers had very little opportunity for planting due to the wet conditions, but pushed forward as the weather permitted. There were reports of flooding throughout the state with high water being prevalent in river bottoms. Any damage will be assessed in the coming week sparking the potential for replanting of some crops. The relentless rainfall was accompanied by unseasonably cool temperatures further complicating crop condition. Many farmers planted soybeans early and as such the crop is ahead of where it is historically at this juncture. Corn planting is well ahead of last year and trends on the higher side when compared historically. Tobacco setting has begun for some producers however only 1 percent of the crop is in the ground. The average height of tobacco transplants is 14 percent less than 2 inches, 35 percent two to four inches, and 51 percent larger than 4 inches. Tobacco transplant supplies are rated as 3 percent short, 94 percent adequate, and 3 percent surplus.

Wheat condition remains mostly good with 68 percent of the crop headed. Overall pasture condition is mostly good, however the cooler temperatures have stunted growth. It is also of note that the heavy rains will muddy up a good deal of pasture ground and open it up to damage from livestock traffic. Early hay cuttings may be adversely affected by the recent frosts and freezes. 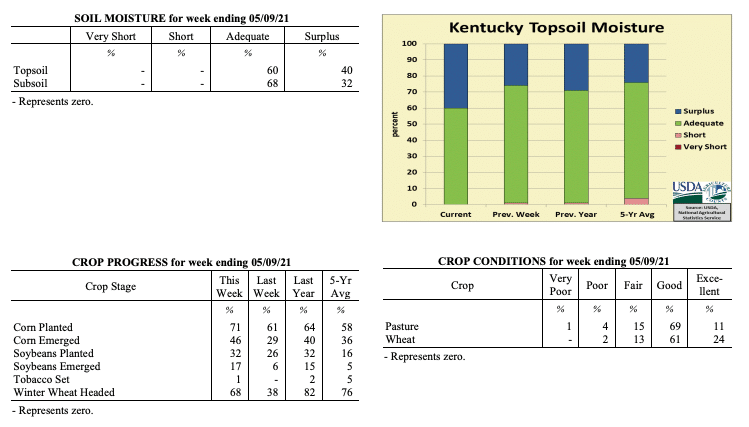