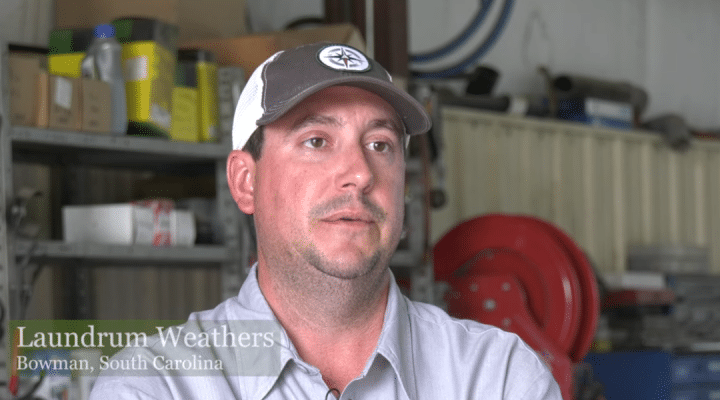 Fifth-generation farmer Landrum Weathers said that “every year that we don’t get a named storm that hits here is a good year.” (Photo: National Crop Insurance Services)

The challenges presented by weather volatility was something that we heard repeatedly from farmers in hurricane-prone South Carolina. Fifth-generation farmer Landrum Weathers said that “every year that we don’t get a named storm that hits here is a good year.”

Landrum farms corn, peanuts, soybeans and cotton while also working as a crop insurance agent with the Agriliance Insurance Group. He said choosing to purchase crop insurance is not a difficult decision. It helps sustain his farm, so he can keep producing food and fiber.

“Crop insurance basically ensures that the growers are going to be farming next year. That means that our country doesn’t have to call somebody else, I don’t care who, to get food,” Landrum said.

J.C. Carroll, who founded Agriliance Insurance Group alongside Ben Tillman, echoed Landrum’s comments on food security, explaining “it’s important for farmers to protect themselves with crop insurance. I think that crop insurance is our best safety net… It gives us food security.”

Weather was also top of mind for Johnny Watts, a fourth-generation farmer who grows corn and soybeans and raises cattle. “Every time a storm makes up out in the Atlantic, you kind of hold your breath and, you know, is this going to be it.”

Each storm brings with it a feeling of hopelessness. Farmers can prepare for every scenario, but they can’t hold back Mother Nature.

“You could have a great crop today. Tomorrow, you may not,” Johnny said.

“No farmer wants to have a loss,” explained Brian McClam, a seventh-generation farmer. Brian grows cotton, soybeans, and corn, and has had a couple close calls when it comes to natural disasters.

“Without crop insurance… this farm would not still be here. It would be gone,” Brian said.

Several years ago, seventh-generation farmer Neal Baxley watched as a foot and a half of rain washed away the crops he was about to harvest. An entire growing season, and the expenses and inputs and time that went into that season, gone.

Crop insurance helped soften the blow. Neal said there is a misconception that crop insurance covers a farmer’s entire loss. “It’s not going to make him completely whole but it’s a tool that can try to help him get him through to the next year.”

As Johnny Watts said, “You live to fight another day because of crop insurance.”

Watch these stories and more at CropInsuranceInAmerica.org.