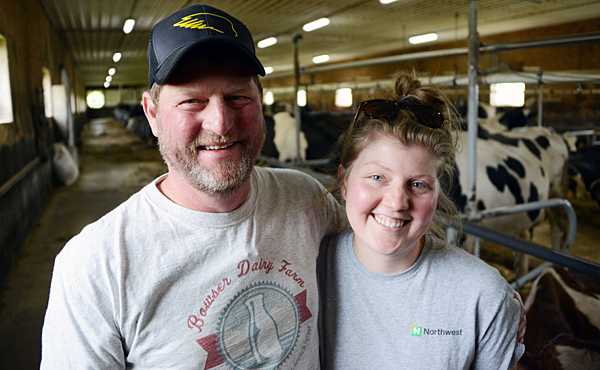 Scott Bowser runs a dairy farm about an hour and a half north of Pittsburgh in western Pennsylvania’s famous farm country. (National Crop Insurance Services)

PITTSBURGH — Scott Bowser runs a dairy farm about an hour and a half north of Pittsburgh in western Pennsylvania’s famous farm country.

His dad bought the farm when he was 6 and started with a herd of 14 cows. It’s grown since then and today, Bowser farms with his wife and youngest daughter, Abby. His oldest daughter would like to come back to the family farm.

Like all dairy farmers in Pennsylvania, and across the nation, he’s felt the impact of tariffs in the international market and low commodity prices.

“You take the good with the bad,” he said. “And everybody knows, the last few years have not been so good.”

But Bowser loves it. And he wants to pass the farm down to his children.

“If you want something for your kids to take over … if that’s something that they really want to do, there has to be something there,” he says.

National Crop Insurance Services recently visited farmers across Pennsylvania to find out how they are managing to keep something here for themselves and the next generation.

Times are tough in the Commonwealth.

The state, second in the nation in dairy, lost 370 farms last year, according to USDA.

Down the road from Bowser’s place, Jared Smith is the eight-generation farming his family’s land. He wants to pass it to his children.

“The margins in agriculture are so slim right now that I feel crop insurance gives you a level of security that you are going to have some income off the investment you are making into your crops,” he said.

It helped keep him in business last year when late season rains forced him to leave hay, meant for his cows, standing in the fields.

Bowser agrees. He went 10 years without making a claim until wet years hurt his corn and bean crops.

“Crop insurance is one of those things that when you need it, you need it real bad,” he said. “And you get that check and you’re really glad to see that check coming. You might not be in business if you didn’t have it. The risks are too great.”