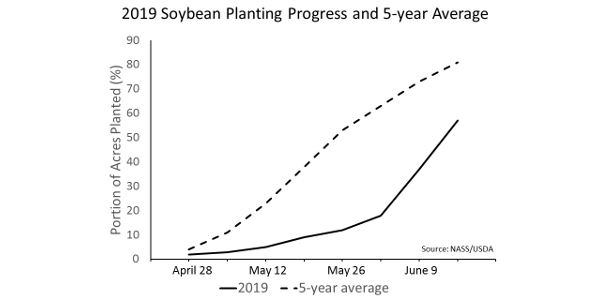 This could be a year when Mother Nature tests its resilience. Wiebold says Missouri farmers got a triple whammy of prevented corn planting, reduced soybean yield from delayed planting, and poor crop vigor of emerged corn and soybean plants.

Missouri’s average rainfall in May topped any May since 1895, when the National Weather Service began keeping records. MU Extension climatologist Pat Guinan reports that in May 2019 Missouri received about 200% of normal May rainfall. It was not only the amount of rain, Guinan said, but the longevity of the wetness.

Wet weather across the crop-producing areas of Missouri resulted in a significant delay in corn planting, which in turn had a ripple effect on soybean planting.

According to the latest information from USDA’s National Agricultural Statistics Service, only 57% of Missouri’s intended soybean acres is in the ground.

“We’ve made some progress the past week with Missouri soybean farmers planting 1 million acres in seven days, but we are well behind the five-year average of 81% planted,” Wiebold says.

“A majority of Missouri’s soybean crop will be planted more than a month past the optimum planting date,” Wiebold says. “The ultimate effect on yield is yet to be determined, but the upper limit of yield potential has been diminished.”

For more information, see Wiebold’s article “Make the Most From Late-Planted Soybean” at extension2.missouri.edu/news/make-the-most-from-late-planted-soybean-4030.

Be patient on roadways after floods