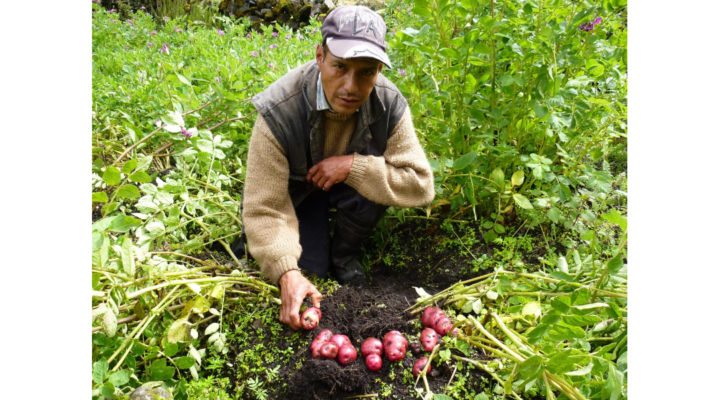 This is a Peruvian potato farmer. (Saúl M. Tito)

As co-author of a study published in Global Change Biology, Feeley, along with fellow biologist, Richard Tito, a native Quechua Indian from the region and the study’s first author, discovered that tough times lie ahead for rural farmers growing the Andes’ staple crops–corn and potatoes.

“The research was executed in a very remote part of Peru,” said Feeley. “We were trying to look at how the traditional agriculture practices of people in the high Andes Mountains will be impacted by climate change so we performed a set of experiments to simulate different scenarios under global warming.”

In the first experiment, the researchers simulated what will happen if farmers continue cultivating the same areas amid rising temperatures. To do this, they grew corn farther down the mountain, where temperatures are slightly higher. “We carried in the soil from where the corn is normally grown because the soil at the top of the mountain is different in texture and nutrients than the soil at lower elevations,” said Feeley.

The simulation revealed that, with just a small temperature increase of 1.3 degrees to 2.6 degrees, nearly all the corn plants were killed by invading birds and pest insects. Potato plants fared even worse. When potatoes were grown at lower elevations (but in their normal soil), most of the plants died and any potatoes that survived were of such low quality they had no market value.

In a second set of experiments, the researchers simulated what will happen if farmers try to counteract rising temperatures by moving their corn farms to higher elevations. (Potato crops are already grown along mountain peaks, so moving those farms higher isn’t an option.) To accomplish this simulation, the researchers grew corn under normal temperatures but in soils carried in from higher elevations. When grown at a higher elevation, the corn plants survived but the quality and quantity of the harvest was greatly reduced.

“We found big decreases in the yield, quality, and the market value of the corn and potatoes planted under these simulated future conditions,” said Feeley. “Notably, much of the decline was due to increased damage by pests, something that is often not taken into account in greenhouse or lab studies. Given the extreme importance of these staple crops for Andean communities, our findings can have huge, and scary, implications.”

The study measured the crops during a growing season within the remote Huamburque area of the Andean Amazon basin, where elevations range between 3,000 and 4,000 meters. Unfortunately, Feeley said, farmers in this rural area of Peru lack the means to purchase genetically modified varieties of corn or potato, as well as pesticides to remove the pests or commercial fertilizers.

“Small communities in rural places don’t have the technology or market access to quickly adapt to climate change,” said Feeley. “Some farmers might be able to switch their crop to a variety that is tolerant to higher temperatures, but many lack the resources to save their crops by using irrigation pumps or fertilizers. These farmers are in jeopardy as are millions of people who depend on these crops throughout the Andes of Colombia, Ecuador, and Bolivia.”

–University of Miami
via EurekAlert!

How do fertilizers help with food security?